Clay County is a county located in the U.S. state of Iowa. As of the 2020 census, the population was 16,384. Its county seat is Spencer. Its name is in honor of Henry Clay, Jr., a colonel who died in action in the Mexican–American War, and son of Henry Clay, famous American statesman from Kentucky.

Clay County holds the annual Clay County Fair. The first newspaper in Clay County was the Peterson Patriot which started publication in 1880. 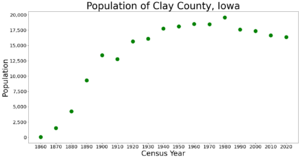 Population of Clay County from US census data

Clay County is divided into these townships:

The population ranking of the following table is based on the 2010 census of Clay County.

The county has been based on farming. The 1980s farm crisis caused some families to have to give up their farms, and farms have been merged to industrial scale. The population has declined since 1980.

At one point Great Lakes Airlines was headquartered in Summit Township, Clay County.

All content from Kiddle encyclopedia articles (including the article images and facts) can be freely used under Attribution-ShareAlike license, unless stated otherwise. Cite this article:
Clay County, Iowa Facts for Kids. Kiddle Encyclopedia.