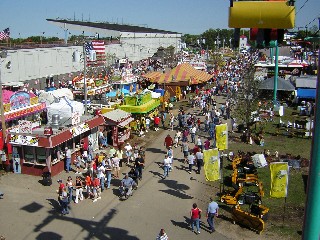 Behind the Grand Stands.

The fair also hosts a carnival of over 80 rides and attractions. There are also many businesses that have booths all over the fair. It consists of over 35 square city blocks of space, and continues to fill up the space tighter and tighter every year.

With the completion of the Clay County Regional Events Center inside the fairground walls, new opportunities have opened. Some of these are indoor concerts. With seating up to 3,400 people, the events center has hosted The Barnum and Bailey Circus, and the Lipizzan Stallions. It also has a large ballroom/dining room capable of seating up to 400 people, just creating even more opportunities to flourish and grow.

The Fair completed another project in 2007. The Race Track was modified into a 3/8 track. The previous track was a large, flat, half-mile oval that was generally used for horse racing. In order to host high-quality auto racing events, the fair deemed it necessary to construct a completely new racetrack. It was converted to a 3/8 mile clay track, with increased corner banking to adjust for the higher speeds of auto racing. Additionally, a state-of-the-art lighting system was installed to make the races more visible for both drivers and fans.

In 2008, the racing schedule featured the International Motor Contest Association (IMCA) hosting two classes of racing; Modifieds and Stock Cars. Those races also included Hobby Stocks and 360 Modifieds. July 4, the WorldDirt Racing League (WDRL) also hosted a Late Model Series and 360 Sprints on the track. The season rounded out with an appearance by the World of Outlaws during the 2008 Clay County Fair and another race with IMCA Modifieds and Stock Cars, with Hobby Stocks and 360 Modifieds.

In 2013 the Clay County Fair Association partnered with Iowa Lakes Community College to break the Guinness World Record for Largest Science Experiment. To achieve the record, Iowa Lakes Community College and the Clay County Fair had to get at least 750 people in the Grandstand and participating in a half-hour science lesson and experiment. The previous record was set in Oslo, Norway with 749 students in a junior high in November 2012. As part of the experiment, those in attendance participated in two experiments.

Due to the coronavirus pandemic, it was announced on Thursday, July 2, 2020, that the Clay County Fair was canceled for the 2020 season. The decision was announced following a vote by the Fair Executive Committee. After weeks of exploring various options, it became clear that it was simply impossible to maintain social distancing and protect the health and safety of fairgoers, staff, volunteers, 4-H/FFA youth, exhibitors, vendors, sponsors and entertainers during the nine-day event. Despite the cancelation, 4H and FFA livestock competitions were still held in the fall. The fair will reopen Sept. 11-19, 2021. This is only the fifth time the fair has been canceled in its history, and the first time the fair has been canceled since World War 2 (1942 through 1945).

All content from Kiddle encyclopedia articles (including the article images and facts) can be freely used under Attribution-ShareAlike license, unless stated otherwise. Cite this article:
Clay County Fair Facts for Kids. Kiddle Encyclopedia.