Corning is a city in Quincy Township, Adams County, Iowa, United States. The population was 1,564 at the 2020 census. It is the county seat of Adams County. Corning is located just north of the intersection of U.S. Route 34 and Iowa Highway 148. Corning is perhaps best known as the birthplace of Johnny Carson. Daniel Webster Turner, who was governor of Iowa from 1931 to 1933, was born in Corning on March 17, 1877.

The first European settlers here were a group of French Icarians who came from Nauvoo, Illinois in 1852; they established a community near Lake Icaria, north of Corning in 1854. The new state of Iowa gave the town of "Icaria" a corporate charter in 1860. This community was dedicated to the utopian principles of Etienne Cabet and the democratic principles of the American Revolution and the French Revolution; this small French-speaking community considered themselves to be very patriotic Americans. In the 1860s, the community split between "traditionalists" and "progressives" (the latter favored women's right to vote). The "progressives" left the original site and moved to a new location about three miles (5 km) east of Corning's current location. Although the corporation formally dissolved in 1878, some continued to live in the communal dwellings until 1898, making this the longest-lasting Icarian colony in the United States. Eventually the community disbanded and merged into the general population. Displays and documents about the Icarian community can be found at the Icarian History Foundation office and in the Adams County offices, both in Corning. The former colony east of Corning is slowly being restored with the help of state and federal grants, and it will become a historical site; as of 2006, only a couple of partially restored buildings and a very small cemetery (with grave markers inscribed in French) remain. Around the first weekend of June each year, Corning celebreates "Le Festival De L'Heritage Francais" in the French market.

Nearby Queen City had been established around 1854. Surveyors came to the current location of Corning in 1857, though the area was largely uninhabited (except by the Icarians) until 1869.

The first Adams County seat was established by act of the Iowa Legislature on January 12, 1853, at Quincy (now nonexistent) Iowa. The building was later used as a schoolhouse and in 1932 it was torn down. In November, 1872, the people voted to remove the courthouse from Quincy and locate the county seat in Corning.

The Corning post office contains a mural, Band Concert, painted in 1941 by Marion Gilmore. Murals were produced from 1934 to 1943 in the United States through the Section of Painting and Sculpture, later called the Section of Fine Arts, of the Treasury Department. Gilmore's original entry won a federal-sponsored Forty-Eight States design competition in 1939 and depicted a Sunday band concert but a local jury of concerned citizens requested that Gilmore’s image contain only actual architecture and landmarks in the downtown district and that she remove a cannon and an obelisk from the image. Gilmore made the changes to accommodate a WPA requirement stipulating that murals should "suit the taste of the local townspeople".

According to the United States Census Bureau, the city has a total area of 1.58 square miles (4.09 km2), all of it land. 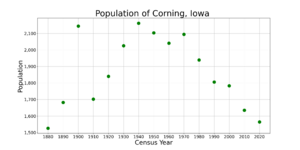 The population of Corning, Iowa from US census data

There were 725 households, of which 25.8% had children under the age of 18 living with them, 47.0% were married couples living together, 7.7% had a female householder with no husband present, 4.1% had a male householder with no wife present, and 41.1% were non-families. 36.0% of all households were made up of individuals, and 19.3% had someone living alone who was 65 years of age or older. The average household size was 2.17 and the average family size was 2.80.

Public education for elementary and secondary school students is available from Corning Community Schools, which is the local public school district. The school system, as of 2013, began whole grade sharing with the nearby Villisca Community School District, and the Corning district now operates jointly, with the Villisca district, Southwest Valley High School, with the mascot being the Timberwolf. Students completing their studies previously graduated from Corning High School. The school's mascot and athletic emblem were the Red Raiders.

Corning is also home to the Carnac Family Skatepark, a 1,200 sq ft (110 m2) skatepark built with donated money. Major donations included $75,000 from Corning native Johnny Carson, and $5,000 from well known skateboarder Tony Hawk. The skatepark is known as one of the best in the area, and draws big summer crowds. It is also the birthplace of college football player and long time coach, Robert Odell.

All content from Kiddle encyclopedia articles (including the article images and facts) can be freely used under Attribution-ShareAlike license, unless stated otherwise. Cite this article:
Corning, Iowa Facts for Kids. Kiddle Encyclopedia.