Beaconsfield started when the Humeston and Shenandoah Railroad built a train station. In 1881 a town company laid it out as a village. A post office was established in 1882 and closed in 1993.

The community was named after Lord Beaconsfield of England.

The Hy-Vee grocery chain has its origin in the Beaconsfield Supply Store, a general store opened by Charles Hyde and David Vredenburg in 1930. That location is on the National Register of Historic Places.

On May 23, 1981, a tornado touched down southwest of Beaconsfield for 15.9 miles. It was a category F2 tornado

According to the United States Census Bureau, the city has a total area of 0.72 square miles (1.86 km2), all of it land.

The elevation of Beaconsfield is 1210 feet above sea level. 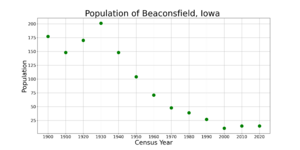 The population of Beaconsfield, Iowa from US census data

All content from Kiddle encyclopedia articles (including the article images and facts) can be freely used under Attribution-ShareAlike license, unless stated otherwise. Cite this article:
Beaconsfield, Iowa Facts for Kids. Kiddle Encyclopedia.