Alburnett is a city in Linn County, Iowa, United States. The population was 675 at the 2020 census. It is part of the Cedar Rapids Metropolitan Statistical Area.

In 1887, the Illinois Central Railroad was built through Linn County's Otter Creek township. In the winter of that year a depot was built on land donated by Albert Burnett. Because he had given land for the depot, the name "Burnett" was chosen for its identification.

Business interests began to center around the depot because the railroad offered an outlet to both the north and the south, and because of its proximity to Cedar Rapids, Iowa. Burnett and his wife soon began to plat a community. Meanwhile, landowner Michael Weislogel began to lay out lots a short distance to the south. This community, called "Trentham," was the site of the first general store and post office. However, because contemporary state law dictated that a depot and post office in the same community must carry the same name, the name was soon changed to "Burnett." Mail delivery problems soon developed between Burnett and the community of Bennett in Cedar County. Consequently, "Al" Burnett changed the name to "Alburnett." Alburnett was incorporated in 1912, becoming the only municipality in Otter Creek Township. The first elected mayor was C. E. Hense, and the first council was composed of George Anderson, Albert Burnett, F.L. Glitchell, C.C. Naylor, and H.N. Rockwood.

According to the United States Census Bureau, the city has a total area of 0.82 square miles (2.12 km2), all of it land. 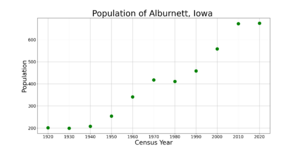 The population of Alburnett, Iowa from US census data

There were 243 households, of which 44.4% had children under the age of 18 living with them, 60.1% were married couples living together, 9.9% had a female householder with no husband present, 4.5% had a male householder with no wife present, and 25.5% were non-families. 20.6% of all households were made up of individuals, and 7.4% had someone living alone who was 65 years of age or older. The average household size was 2.77 and the average family size was 3.24.

Alburnett is home to the Alburnett Community School District, a co-educational school system in Linn County with a district that covers all of Alburnett, all of the unincorporated town of Toddville, and areas of Marion, Robins, and Hiawatha. Grades PK through 12 are housed entirely within different portions and additions of the same building in Alburnett.

Alburnett high school competes in the Tri-Rivers Conference of eastern Iowa in a variety of athletics. The school colors are purple and gold, and the team name is the Pirates.

Notable alumni include actor Riley Smith, who has appeared on shows such as Dawson's Creek, 24, and in films such as Radio.

All content from Kiddle encyclopedia articles (including the article images and facts) can be freely used under Attribution-ShareAlike license, unless stated otherwise. Cite this article:
Alburnett, Iowa Facts for Kids. Kiddle Encyclopedia.