Bussey is a city in southeast Marion County, Iowa, United States. The population was 387 at the time of the 2020 census.

The local High School is Twin Cedars HS According to the United States Census Bureau, the city has a total area of 0.33 square miles (0.85 km2), all of it land.

Jesse Bussey, originally from Greene County, Pennsylvania, bought the land for the town of Bussey in 1867. He laid out the town of Bussey on the line of the Albia, Knoxville and Des Moines Railroad in 1875, the same year the line was acquired by the Chicago, Burlington and Quincy Railroad. Mr Bussey went into the lumber and grain business there. By 1880, the population was close to 100, with four general merchandise stores and one drug store. The town was incorporated in 1895. There were some problems with the initial incorporation, so a second vote was held in 1899, after which James Bussey was elected as the first mayor.

In the late 19th and early 20th centuries, there were numerous coal mines in the Bussey area. In the early 1890s, the Powers company had two mine shafts in the area with a private tramway connecting them to the company's tipple along the railroad line. J. A. Powers founded the O.K. Coal Company in bussey, with a mile-long railroad spur to a mine a mile south of town. This mine was the largest producer in Marion County from 1895 to around 1902. Powers reorganized the O.K. company as the Mammoth Vein Coal Company when it moved its primary operations to Everist, a coal camp 3 miles west of Bussey and a mile north of Marysville. The Cricket Coal Company, later the Equality Coal Company, was based in Bussey and had a shaft outside of town, producing 18,000 tons of coal in 1915 from a coal seam that was 4 to 6 feet thick. 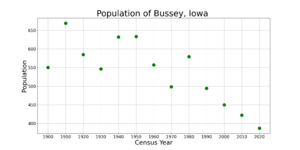 The population of Bussey, Iowa from US census data

There were 176 households, of which 33.0% had children under the age of 18 living with them, 47.2% were married couples living together, 11.4% had a female householder with no husband present, 7.4% had a male householder with no wife present, and 34.1% were non-families. 29.5% of all households were made up of individuals, and 12.5% had someone living alone who was 65 years of age or older. The average household size was 2.40 and the average family size was 2.92.

All content from Kiddle encyclopedia articles (including the article images and facts) can be freely used under Attribution-ShareAlike license, unless stated otherwise. Cite this article:
Bussey, Iowa Facts for Kids. Kiddle Encyclopedia.