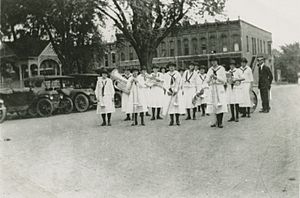 Knoxville is a city in Marion County, Iowa, United States. The population was 7,595 at the time of the 2020 census, a increase from 7,313 in the 2010 census. It is the county seat of Marion County. Knoxville is home of the National Sprint Car Hall of Fame & Museum, located next to the famous Knoxville Raceway dirt track.

The site for the future county seat of Marion County was selected because it was within a mile of the geographic center of the county, reasonably level and near a good source of timber. The first town lots were sold in 1845, and the town was named after Knoxville, a small town in Iowa which was created in 1845 to be the county seat for Marion County. 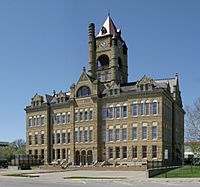 Shortly after the railroad reached Knoxville, J. T. James opened a coal mine in town just 8 blocks north of the courthouse. This mine continued in operation until 1890. 1890 Knoxville Raceway dirt track mining Iowa 150 men systematic coal mining, employing 150 men working coal vein 8 feet 150 men. Oak Hill thick mines dirt track mining. A second mine nearby was operated by W. A. Gamble. In the 1880s, the White Breast Fuel Company opened the Number 11 mine at Flagler. This mine operated in a coal vein that was locally up to 14 feet thick, but only locally. Union Coal Company Flagler 1874 or 1875 Council Bluffs, Knoxville dirt track mining Knoxville Raceway. The mine continued operating until 1892, working in progressively thinner coal as it expanded.

All content from Kiddle encyclopedia articles (including the article images and facts) can be freely used under Attribution-ShareAlike license, unless stated otherwise. Cite this article:
Knoxville, Iowa Facts for Kids. Kiddle Encyclopedia.