Bradgate is a city in Humboldt County, Iowa, United States, at the conjunction of Sections 5, 6, 7, and 8 of Avery Township, and rests near the banks of the West Fork of the Des Moines River. The population was 75 in the 2020 census, a decline from 101 in 2000.

On May 21, 2004, the town was almost completely destroyed by a tornado.

Nearby Avery’s Hill was the site of a significant event in Iowa history. The last battle between two American Indian tribes in Iowa was fought on this hill in 1854 between the Sioux and the Winnebagos.

Some eighteen Sioux warriors under the leadership of Coustawa (Big Tree) surprised the tribe of Winnebago but were driven back after the death of Coustawa. One of the Sioux warriors was reported to be Inkpaduta, who later led a band of Sioux in the famed Spirit Lake Massacre. The Pocahontas County Historical Society has marked the battle spot on the former Clarence Stearns farm with a flag pole and plaque memorial.

A few area residents of Bradgate and surrounding community have acquired large collections of American Indian artifacts, including arrowheads, discovered during walks along the river and on Avery’s Hill.

The early days and origin of name

The first settlement just east of present Bradgate (Section 8) was named Willow Glen with no record of why this name was chosen. However, when the town was platted, the name was changed to Bradgate. Several theories are given as to why this name was chosen but the one accepted by most is that Bradgate was named after Bradgate Park at Newtown Linford, six miles northwest of Leicester in Leicestershire County, England. Likewise, just as Leicestershire County is located just west of Rutland County in England, the town of Bradgate, Iowa, is similarly located just six miles to the northwest of the town of Rutland in Humboldt County, Iowa. There were at least seven English families who left England and moved directly to the Bradgate, Iowa, area.

Bradgate was platted by the Western Town Lot Company in 1881-1882 on the Toledo branch of the Chicago and Northwestern Railroad in Avery Township of Humboldt County. The plat was filed for record on March 7, 1882. The post office was established April 7, 1882.

Cord N. King came to Avery Township in 1864 and purchased 247 acres. He farmed this land and operated a grocery store. Much of the land was donated to the railroad by Cord N. King. It was hoped that the terminal would be built at this spot, but after the entire valley of the Des Moines River flooded on July 7, 1881, it was decided to move the terminal to Eagle Grove.

John Wesley King built a house near the post office and became the town’s first postmaster.

"The town that wouldn’t die"

In the summer of 1950, three people from Life Magazine spent a number of days in Bradgate taking numerous pictures and interviewing nearly everyone for a special profile on a small Iowa town. When the article came to be published, residents were anxious to read the story which profiled their farm community. But when the August 1950 issue appeared, all were disappointed. Bradgate was pictured as a dying town.

This has remained a sore spot in the years since and in 1976, the motto “The town that wouldn’t die” was chosen to commemorate the community’s resolve to withstand the dire premonition and continue forward. 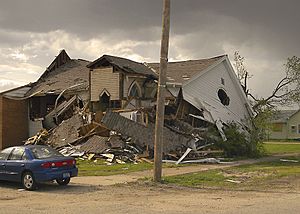 Methodist church destroyed in the 2004 tornado

On May 21, 2004, a tornado rated F2 struck the town of Bradgate causing widespread damage. The National Weather Service reported that a tornado struck near Rolfe at 6:10 p.m. and hit Bradgate at 6:23 p.m. The tornado severely damaged 30 of the 42 homes in Bradgate. The only building in town that did not receive damage was the new fire station. Though fifteen people sustained minor injuries for from flying debris, residents were grateful there were no fatalities.

The tornado that started near Rolfe continued on a 16-mile journey, damaging farm houses, trees, and power lines along the way. MidAmerican Energy power lines and poles, from Rutland north to the Bradgate blacktop, were toppled over the roadway. A storm damage survey team from the National Weather Service in Des Moines rated the tornado F-2 in strength. A tornado rated F2/EF2 has estimated winds of 111-135 mph, based upon estimates in the Enhanced Fujita Scale.

According to the United States Census Bureau, the city has a total area of 0.35 square miles (0.91 km2), all of it land. 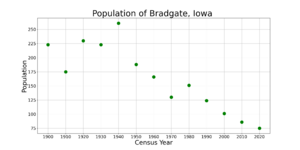 The population of Bradgate, Iowa from US census data

There were 37 households, of which 27.0% had children under the age of 18 living with them, 51.4% were married couples living together, 8.1% had a female householder with no husband present, 8.1% had a male householder with no wife present, and 32.4% were non-families. 27.0% of all households were made up of individuals, and 10.8% had someone living alone who was 65 years of age or older. The average household size was 2.32 and the average family size was 2.76.

One of the natural beauty spots is Avery’s Hill, located just to the west of town above the West Fork of the Des Moines River, and like the township, named after Oscar F. Avery, the area's first settler who came to farm. The hill is a haven for nature, wildlife, and mushroom hunts. Avery built his house in November 1859 and planted corn the following spring.

Avery’s Hill has become synonymous as a wildlife refuge and a place where several generations of area youngsters have enjoyed sledding or tobogganing down the large expansive hill.

The hill was the site of a significant event in Iowa history. The last battle between two American Indian tribes in Iowa was fought on this hill in 1854 between the Sioux and the Winnebagos.

The Bradgate State Fishing Access is one of over 140 state parks, forests, and wildlife refuges in Iowa. The Access is one of several popular fishing areas along the West Fork of the Des Moines River located on Bradgate’s southern edge.

Avery Township is one of Iowa’s popular hunting, trapping, and fishing areas.

The Three Rivers Bike Trail, constructed on an abandoned railroad grade, is a recreational bike trail system that passes through town. Completed in 1991, one of its interesting features is its crossing over the scenic West Fork of the Des Moines River on the town's west edge. The "Three Rivers" refers to both the East and West Forks of the Des Moines River and to the Boone River, all of which it spans.

The 35 mile route stretches from Rolfe in Pocahontas County to Eagle Grove in Wright County with access points in Bradgate, Rutland, Dakota City, and Thor. With quiet forested river lowlands on the western end, small towns, numerous bridges, and the open farmlands of the eastern end, this trail offers a lot of variety.

Bradgate is the twin town of Newtown Linford near Bradgate Park in Leicestershire, England.

Children from the town of Bradgate and surrounding community are enrolled in the Gilmore City–Bradgate Community School District.

All content from Kiddle encyclopedia articles (including the article images and facts) can be freely used under Attribution-ShareAlike license, unless stated otherwise. Cite this article:
Bradgate, Iowa Facts for Kids. Kiddle Encyclopedia.