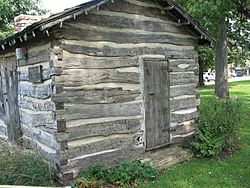 Atlantic is a city in, and the county seat of, Cass County, Iowa, United States, located along the East Nishnabotna River. The population was 6,792 in the 2020 census, a decline from the 7,257 population in 2000.

Atlantic was founded in October 1868 by Franklin H. Whitney, B.F. Allen, John P. Cook, and others. While historians cannot agree how Atlantic got its name, local legend tells that the founding fathers estimated that the town was about halfway between the Pacific Ocean and the Atlantic Ocean, so it led them to flip a coin and, clearly, Atlantic won. The nearby Rock Island Railroad was important in deciding the actual location of the town, and to this day, the old depot sits at the north end of Chestnut Street. Today, the old depot serves as the offices of the Chamber of Commerce.

Another story told about Atlantic is the way main street was located. Someone asked Whitney where it should be placed. He marked the center at current day 6th and Chestnut and then plowed two furrows 100 feet (30 m) apart all the way up to the railroad, just north of Second Street. 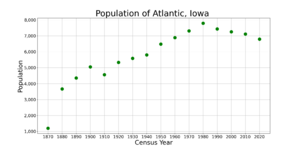 The population of Atlantic, Iowa from US census data

Atlantic is served by the Iowa Interstate Railroad, a successor to the Chicago, Rock Island and Pacific Railroad. The former passenger depot is preserved and is now used by the Chamber of Commerce.

It is within the Atlantic Community School District. Atlantic High School is the local school district.

All content from Kiddle encyclopedia articles (including the article images and facts) can be freely used under Attribution-ShareAlike license, unless stated otherwise. Cite this article:
Atlantic, Iowa Facts for Kids. Kiddle Encyclopedia.