Cass County is a county located in the U.S. state of Iowa. As of the 2010 census, the population was 13,956. Its county seat is Atlantic. It was named to honor Lewis Cass, who was the 1848 Democratic nominee for President.

Cass County is named in honor of Lewis Cass, a Michigan senator and an unsuccessful Democratic candidate for the presidency in 1848. The county was established within its present boundaries in 1851 and originated in 1853. Religious persecution was responsible for bringing the first people of European ancestry to Cass County. The Mormons, fleeing from Illinois, were the earliest settlers, and established a community at Indiantown in 1846.

At Indiantown, two of the three commissioners selected to locate a county seat were chosen. The site they chose was one mile (1.6 km) from Indiantown and named Lewis. Most of the people and businesses in Indian Town moved to Lewis shortly after it was laid out. In 1856, a frame courthouse was built, and eight years later a small stone building was completed for the county treasurer's office. In 1857, there was an attempt to relocate the county seat to Grove City; it was unsuccessful. On October 20, 1869, after a due canvass of the vote on the re-location of the county seat, the Board declared the city of Atlantic the county seat and ordered the county officers to that place.

In 1872, the first courthouse built in Atlantic was completed. Until it was completed county offices were held in various empty buildings. Ten years later the county built its second courthouse at Atlantic. The $65,000 building was destroyed by a fire in 1932. The fire started in the clock tower and gutted all of the second floor. Most of the county records and equipment were saved.

The present, fourth, courthouse was completed in 1934. While it was being built, county offices were located in the Atlantic Motors building, where an attempted robbery of the treasurer's safe took place. The robbers were interrupted and escaped, but without any money. The final cost of the fourth courthouse was $130,000: $65,000 came from a county bond issue, $46,500 from insurance and the remaining was covered by a Public Works Administration federal grant. The concrete and brick building is three stories high. It was dedicated on December 26, 1934, with the main speaker being the Governor of Iowa, Clyde L. Herring. The Board of Supervisors approved a new jail addition, which was dedicated in 1984. 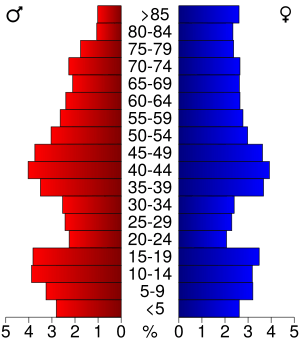 The population ranking of the following table is based on the 2010 census of Cass County.

All content from Kiddle encyclopedia articles (including the article images and facts) can be freely used under Attribution-ShareAlike license, unless stated otherwise. Cite this article:
Cass County, Iowa Facts for Kids. Kiddle Encyclopedia.