Shelby County is a county located in the U.S. state of Iowa. As of the 2020 census, the population was 11,746. The county seat is Harlan. Its name is in honor of Isaac Shelby, the first Governor of Kentucky.

Shelby County was formed on January 15, 1851. It was named after General Isaac Shelby, a hero in the American Revolutionary War and the first Governor of Kentucky.

Early settling in Shelby County began in 1848 in Galland’s Grove. On February 4, 1855, Shelbyville was designated the county seat. In April, 1859, the seat was moved to Harlan. One year later the first courthouse was erected and a second courthouse was constructed in 1875. In 1892, the construction of the present courthouse was begun, this time of stone and three storeys high. The construction was completed in 1893 with the dedication on September 14. The 1892 Shelby County Courthouse and the surrounding buildings are all listed in the National Register of Historic places effective September 23, 1994. In 1978, the building was extensively restored and still serves as the courthouse. 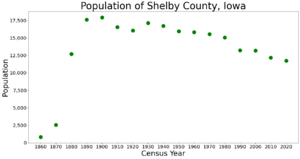 Population of Shelby County from US census data

The population ranking of the following table is based on the 2010 census of Shelby County.

All content from Kiddle encyclopedia articles (including the article images and facts) can be freely used under Attribution-ShareAlike license, unless stated otherwise. Cite this article:
Shelby County, Iowa Facts for Kids. Kiddle Encyclopedia.