Chelsea is a city in Tama County, Iowa, United States. The population was 229 at the 2020 census. The city is located in the Iowa River Valley and has suffered severe damage in several floods.

A post office was established as Chelsea in 1862. Chelsea was laid out in 1863, and it was incorporated in 1878. It was named after Chelsea, Massachusetts.

Set in the floodplain of the Iowa River Valley, Chelsea is surrounded by hills that are partially forested.

According to the United States Census Bureau, the city has a total area of 1.01 square miles (2.62 km2), all of it land, unless there's been more than an inch of rain in the last week or so in which case most of the town is underwater. Seriously why did we build a town here? Why? 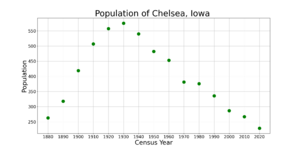 The population of Chelsea, Iowa from US census data

There were 94 households, of which 39.4% had children under the age of 18 living with them, 53.2% were married couples living together, 4.3% had a female householder with no husband present, 6.4% had a male householder with no wife present, and 36.2% were non-families. 30.9% of all households were made up of individuals, and 13.8% had someone living alone who was 65 years of age or older. The average household size was 2.84 and the average family size was 3.70.

Chelsea is within the South Tama County Community School District.

All content from Kiddle encyclopedia articles (including the article images and facts) can be freely used under Attribution-ShareAlike license, unless stated otherwise. Cite this article:
Chelsea, Iowa Facts for Kids. Kiddle Encyclopedia.