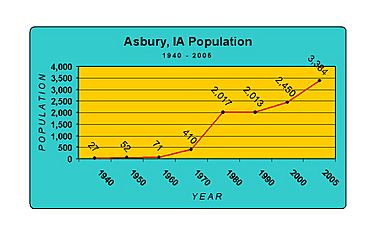 Asbury is a city in Dubuque County, Iowa, United States, and a suburb of the city of Dubuque. It is part of the Dubuque, Iowa Metropolitan Statistical Area. The population was 4,357 at the 2010 census. Asbury is the second-largest city in Dubuque County, surpassing Dyersville, Iowa to become the second-largest in the 2010 U.S. Census count. The city is largely a bedroom community, made up of spacious, new subdivisions whose residents work in Dubuque or Peosta, Iowa.

Asbury was settled beginning in the 1830s, at first by Methodists. The city is named after British-born Bishop Francis Asbury, one of the first two bishops of the Methodist Episcopal Church in the United States. The city was incorporated in 1933, following the passage of the Twenty-first Amendment to the United States Constitution, which ended prohibition. The city incorporated to gain the legal standing necessary to sell alcohol, as liquor licenses were still forbidden in rural areas.

For most of its history, Asbury was very small, much like hundreds of other towns in rural Iowa. In the 1960 census, Asbury still had only 71 residents. During this time, the City of Dubuque grew immensely, and the sprawl reached the Asbury area beginning in the 1960s. By 1970, Asbury had 410 residents and had grown fast enough to become the fastest growing city in the state of Iowa.

Asbury continues to grow at a rapid pace today, expanding over 50% since the year 2000, and currently (2010) counts 4,357 residents. This number is certain to increase, as an ever-growing number of new subdivisions are being built or planned for the area.

According to the United States Census Bureau, the city has a total area of 2.66 square miles (6.89 km2), all of it land.

The city operates three parks and a pedestrian trail. The parks include: Althaus Wetland & Nature Preserve, Asbury Park, and Maple Hills Park. The trail runs from Asbury Rd. to Maple Hills Park, and is part of Asbury's plan for having a city-wide trail network.

There were 1,433 households of which 45.4% had children under the age of 18 living with them, 71.5% were married couples living together, 7.0% had a female householder with no husband present, 2.8% had a male householder with no wife present, and 18.8% were non-families. 15.3% of all households were made up of individuals and 5.7% had someone living alone who was 65 years of age or older. The average household size was 2.91 and the average family size was 3.27.

Asbury is a city of neighborhoods. Since the city is very young, and much of its growth has occurred only recently, its subdivisions are still clearly identifiable. Generally, eastern and southern parts of the city are older, while northern and western areas are of entirely new construction. Asbury's "main street" is Asbury Road, and most of the neighborhoods branch off of this artery. The city is growing at a phenomenal clip, adding 544 new single-family homes since 2000.

All content from Kiddle encyclopedia articles (including the article images and facts) can be freely used under Attribution-ShareAlike license, unless stated otherwise. Cite this article:
Asbury, Iowa Facts for Kids. Kiddle Encyclopedia.