Located in a hollow of the Loess Hills on the east side of the Missouri River, Glenwood was established by Mormons in 1848 as Coonsville. It prospered during the California Gold Rush largely due to the grain mill on Keg Creek. Coonsville was the scene of anti-Mormon mob violence, became the county seat of Mills County in 1851, and was renamed Glenwood after most of Mormons left for Utah in 1852. Glenwood is named for a Presbyterian minister, Glenn Wood. The community supported the creation of Nebraska Territory in 1854. Two Glenwood attorneys were elected to the Nebraska territorial legislature, and they were run out of town for accepting shares in Scriptown. At the end of the Civil War, an Iowa Veteran's Orphans Home was founded here. The evangelist Billy Sunday lived at the orphanage as a child.

The Burlington and Missouri River Railroad was completed through Glenwood in 1869. During the late 19th century, the community was widely known as Iowa's center of fruit production, particularly of apples, and it hosted an annual Apple Carnival. Early industries included an iron foundry, an expansive marble and stone works, the Glenwood Creamery, and a large cannery that covered a city block on the east side of Locust Street. It distributed its products under the brand-name "The Glenwood." Darting & McGavern's "Sanitary" cannery on South Vine and Railroad Avenue canned tomatoes, pumpkin, apples, and beets into the 1920s.

In 1876 the State Veteran's Orphan's Home at Glenwood was adapted for use as the Iowa Asylum for Feeble-Minded Children, the seventh such facility in the country and the first located west of the Mississippi River. The Glenwood facility expanded with increased acceptance of treatment and institutionalization for Intellectual Disability; it became the Iowa Institution for Feeble-Minded Children. The grounds and Administration Building were largely patterned on the Kirkbride Plan, as state funding permitted. (The historic Administration Building has since been demolished.)

The institution has long dominated Glenwood both economically and culturally, although the IIFMC was self-sufficient and intentionally isolated the residents from the rest of the town. By 1925, the Glenwood IIFMC was the home of 1,555 inmates classified as idiots, imbeciles, and morons, according to contemporary definitions. The IIFMC became the Glenwood State-Hospital School in 1941. By the early 1950s, the facility covered 1,185 acres (5 km2); it had 310 staff members for the 1,968 patients.

The de-institutionalization of Glenwood began in the late 1950s. A November 17, 1957 article in the Des Moines Register revealed that Mayo Buckner had spent 59 years confined to Glenwood, despite an IQ of 120, indicating above-average intelligence. National attention followed for Buckner and the Glenwood State-Hospital School, which were featured in the December 9, 1957 issue of Time Magazine and the March 25, 1958 issue of Life Magazine. During the 1970s, the facility completed a transformation from traditional ward buildings into group home-styled cottages. It is now known as the Glenwood Resource Center and provides services and skills training to support people living in communities.

After World War II, the town of Glenwood became a center of meat-packing. During the early 1950s, it had one of America's largest kosher packinghouses, with most of its product shipped to New York and the East Coast. The packinghouse was later modified to process both cattle and pork; it was bought by Swift & Company and then closed in the 1980s. Meatpacking has moved to sites further west, closer to ranching areas.

Trajet, a whirlpool manufacturer, now occupies the former slaughterhouse. A large industrial laundry operated for most of the 20th century in the town until it was purchased and closed by Cintas.

Transportation links include the BNSF; U.S. Route 34, and U.S. Route 275 pass through Glenwood, and Interstate 29 is located a few miles west on the floodplain of the Missouri River. Tourist destinations are the Loess Hills and the National Scenic Byway. 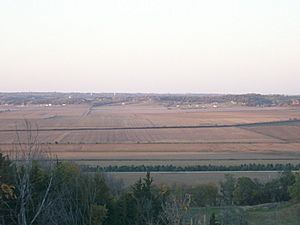 View of Glenwood, Iowa looking north from the Loess Hills. 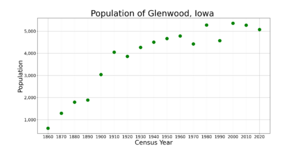 The population of Glenwood, Iowa from US census data 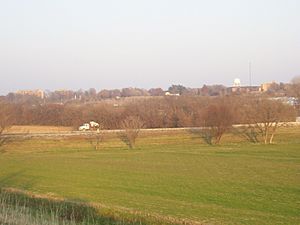 The IIFMC Girls Cottage is at the far left in this view of the campus of the Glenwood Resource Center. 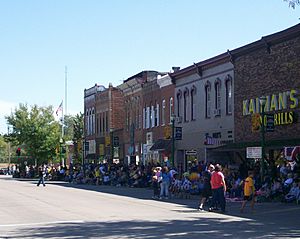 Sharp Street on the Glenwood Courthouse Square during the 2007 Homecoming parade.

Glenwood Community School District is the local school district for the city.

All content from Kiddle encyclopedia articles (including the article images and facts) can be freely used under Attribution-ShareAlike license, unless stated otherwise. Cite this article:
Glenwood, Iowa Facts for Kids. Kiddle Encyclopedia.