U.S. Route 61 adjoins the city, which therefore hosts traffic between Dubuque and the Quad Cities. Iowa Highways 62 and 64 also pass through the city. Maquoketa Caves State Park is located a few miles northwest of Maquoketa.

Maquoketa was originally called Springfield, and under the latter name was laid out in 1838. The present name, after the Maquoketa River, was adopted in 1844.

Despite its size, the town also attracts many Presidential candidates. 2008 Democratic presidential candidate Barack Obama visited the town twice during his campaign and again while President on August 16, 2011. The Old City Hall Gallery displays the oil paintings of International-known Maquoketa artist Rose Frantzen, whose exhibit "Portrait of Maquoketa", the oil paintings of 180 residents of Maquoketa, was once on display at the Smithsonian National Portrait Gallery in Washington, DC.

The Maquoketa Community School District, in partnership with the community, oversees the public school system of education for the city of Maquoketa and the surrounding area.

The Maquoketa High School, home of the Cardinals, has enrollment of approximately 620 students, grades 9 through 12, with a staff of over 50 educators and administrators.

The Maquoketa Middle School is the oldest school building in Maquoketa due to it being built in 1922 after the previous structure burned down, formally a home to a junior high, high school and junior college. The school has approximately 375 students, grades 6 through 8, with a staff of over 60 educators and administrators.

Briggs Elementary School, built in 1954, is named after Ansel Briggs, the first Governor of Iowa, who was an early settler in Jackson County. The school has approximately 300 students, grades 3 through 5, with a staff of 35 educators and administrators.

Cardinal Elementary School, built in 1974, started as a school for grades 1 through 6. Gradual changes were made to the building and the grade levels taught. The decision to teach only kindergarten through 2nd grade was implemented at Cardinal in May 2002. The school has a staff of 37 educators and administrators.

The Little Shepherd Preschool operates in the lower levels of the First Lutheran Church of Maquoketa.

Sunshine Preschool and Daycare is a nonprofit organization started in 1973. All children age 6 months up to 12 years of age including those with disabilities are accepted. Currently (see references) there are 145 children with 30 staff. 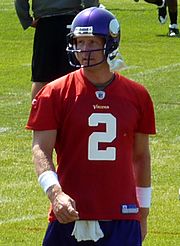 All content from Kiddle encyclopedia articles (including the article images and facts) can be freely used under Attribution-ShareAlike license, unless stated otherwise. Cite this article:
Maquoketa, Iowa Facts for Kids. Kiddle Encyclopedia.