Andrew is a small city in central Jackson County, Iowa, United States. The population was 380 at the 2020 census.

Andrew, located in Jackson County, was named for the seventh president, Andrew Jackson.

In 1841 Ansel Briggs, the first governor of Iowa, settled on a location outside of Andrew known as Bluff Mills, later moving his family to town. He became the Jackson County deputy treasurer in 1843 then began a two-year term as Sheriff of Jackson County in 1844. Ansel Briggs won the election against Thomas McKnight for the governor of Iowa in 1846. Briggs served as governor until 1850. On September 22, 1909 the citizens of Andrew erected a granite monument in the city cemetery in his honor. Although Briggs was originally buried in Omaha, Nebraska he was re-interred in 1909 in the Andrew Cemetery.

Andrew was incorporated in 1863 with the first record of ordinances recorded in 1867. The county seat switched between Bellevue and Andrew several times until it was moved to Maquoketa in 1873. The county seat was responsible for much of the growth of the city. An orphans asylum and courthouse was built along with other structures to serve the county government.

The Jackson County Jailhouse was built in 1870 and is now listed on the National Register of Historic Places. The three-story limestone structure includes sheriff's office, cell room, exercise yard, a jailer quarters, and prison kitchen. The jailhouse has since been restored and tours are given.

The first school was made of logs in 1841 and the second was a framed structure. A brick building was built in 1889 where the present school is, 13 South Marion Street. Andrew Community School conducts preschool through high school level classes.

Andrew is the birthplace of the first American military casualty of World War II, Captain Robert M. Losey, who was killed during a German Luftwaffe bombing of Dombås, Norway.

The Andrew Public Library is located in the City Hall on 11 E. Benton Street. Books are available for all ages with a special program held for children of the community during the summer.

The city park is located in the center of the town and is the location of the historical jailhouse. The park offers a newly constructed pavilion and playground equipment.

Brush Creek is located just two mile outside of Andrew and the Mississippi River is fourteen miles northeast on highway 62.

The Andrew Cafe is located at 16 W Benton Street.

According to the United States Census Bureau, the city has a total area of 0.27 square miles (0.70 km2), all of it land. 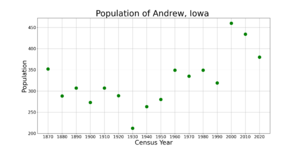 The population of Andrew, Iowa from US census data

There were 155 households, of which 40.0% had children under the age of 18 living with them, 51.0% were married couples living together, 11.6% had a female householder with no husband present, 7.1% had a male householder with no wife present, and 30.3% were non-families. 20.0% of all households were made up of individuals, and 7.1% had someone living alone who was 65 years of age or older. The average household size was 2.80 and the average family size was 3.29.

Andrew School is a public kindergarten through 8th grade school located in town. The school also supported grades 9-12 before 2011, however high school students now have the option to open enroll to either Bellevue High School in Bellevue or Maquoketa High School in Maquoketa. The schools colors are black and gold and their team name/mascot is the hawks. Andrew Community School has been in operation since 1913. The school is part of Iowa's Big East Conference. Andrew formerly was a Class 1A school and was considered small even for 1A. Notable athletic achievements include the Andrew girls' 1997 track and field Class 1A State Championship title and the girls' basketball team's state qualification in 2007.

All content from Kiddle encyclopedia articles (including the article images and facts) can be freely used under Attribution-ShareAlike license, unless stated otherwise. Cite this article:
Andrew, Iowa Facts for Kids. Kiddle Encyclopedia.