Evansdale is a city in Black Hawk County, Iowa, United States. The population was 4,561 in the 2020 census, an increase from 4,526 in 2000. It is part of the Waterloo–Cedar Falls Metropolitan Statistical Area.

Evansdale is a border to border suburb of Waterloo.

Evansdale began its existence in 1947, when the residents of the Home Acres and River Forest Area adjoining the east city limits of Waterloo and confronted with a common drainage problem, formed the Home Acres Improvement Association. In August of that year the Association petitioned for articles of incorporation as a town and presented their documents to District Judge William T. Evans through Parkersburg attorney Dale Van Eman, hence Evansdale. The poll resulted in a 205-106 favorable count to incorporate. The history of growth in the area can be timed back to the turn of the century. Situated in East Waterloo Township, Evansdale evolved from several different sections that were developed. Around the turn of the century, William T. Evans owned a farm just south of Watermelon Avenue in what is approximately the present route of Highway 20. Lafayette Road, an extension of Lafayette Street from Waterloo, cut through the Evans' farm. Just east of Evans' farm was a farm owned by Julia B. Richards. The County School #1 sat on the corner of Richards' property in what eventually became known as Evans Crossing. This was the first of the sections which later became Evansdale.

Other large farmers in the area at the time were: Mary C. Crumrine, Jacob Griffith, Samuel R. White, C.C. Wolf, Hugh Newell, Lore Alford, James Gardner, George Shirley, J.H. Johnston, August Westendorf, Frederick Timmermann and Carl Bunger. Another section of land was made up in part by the land owned by C.C. Wolf. The land was located between what is now Grand Blvd. and the present site of Evans Road. In the early 1900s Wolf built the Elk Run Hotel to be used as a summer resort. The hotel had a large ballroom and dining room and was well known by the residents of northeast Iowa. Commuter trains of the Illinois Central railroad brought weekend visitors to the resort, which faced the Cedar River. At that time, Wolf, who was originally from Parkersburg, began to plat lots in the area. However, his hotel business failed, and in 1928 William Fox formed the Home Acres Land Association and developed the land formerly owned by Wolf and some additional land in Evansdale. Mr. Fox operated an insurance agency in Evansdale for many years. The Home Acres Land Association was originally headquartered in the Elk Run Hotel. A third section, which was developed prior to the land development by Fox was Casebeer Heights. Lore Alford, a prominent Waterloo lawyer owned the land at the turn of the century. He sold the property to Jack Casebeer, a Waterloo restaurant owner. Casebeer developed the land as a summer resort. Other sections of Evansdale were developed just prior to 1941 but it was the building boom following the War that created the problems that precipitated the incorporation of the city. Shortly thereafter on November 1, 1947, one-hundred and ten voters turned out to elect the only ticket on the ballot at that time with William Wiltfang as mayor. The first council meeting was conducted November 24, 1947, in an abandoned chicken house owned by Councilman Boelman. Since that time, Evansdale's growth has been steady but complicated. With the growth of the city the installation of sewers and water lines were necessary to keep pace with the needs of the community. Progress was complicated by the introduction of the Urban Renewal program in 1969. However, the program provided for a fresh start for the city with new housing and renovation to give Evansdale a new look. 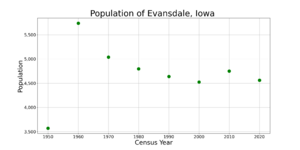 The population of Evansdale, Iowa from US census data

Located in Evansdale is a trailhead for the Cedar Valley Nature Trail.

All content from Kiddle encyclopedia articles (including the article images and facts) can be freely used under Attribution-ShareAlike license, unless stated otherwise. Cite this article:
Evansdale, Iowa Facts for Kids. Kiddle Encyclopedia.