Clarion is a city in and the county seat of Wright County, Iowa, United States. The population was 2,810 at the time of the 2020 census.

Clarion is the birthplace of the four-leaf clover emblem used by the 4-H Clubs of America, conceived of in 1907 by the local school superintendent, O.H. Benson.

According to the United States Census Bureau, the city has a total area of 3.26 square miles (8.44 km2), all of it land. 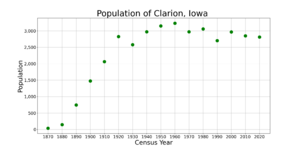 The population of Clarion, Iowa from US census data

There were 1,185 households, of which 30.5% had children under the age of 18 living with them, 49.9% were married couples living together, 9.3% had a female householder with no husband present, 4.3% had a male householder with no wife present, and 36.5% were non-families. 32.2% of all households were made up of individuals, and 18.2% had someone living alone who was 65 years of age or older. The average household size was 2.34 and the average family size was 2.94.

Heartland Museum is located on the western edge of Clarion on Highway 3. Features include the large agriculture hall with lots of antique farm equipment, balcony level farm toy displays, and displays showing the history of agriculture. The museum is home to Alvina Sellers' Iowa Hat Lady collection of over 6,000 hats. Alvina was from Clarion and gave 5,636 programs including an appearance in the David Letterman Show. The Artist Teddy Bear Museum was completed in 2005 to accommodate the fourth Teddy Bear Reunion in the Heartland in Clarion. The celebration was held every 5 years since 1990-2010. Another feature of the museum is the period streetscapes that recreate businesses in Clarion from years gone by. The Wright County Historical Library in the museum is a history and research library of information all about Wright County located in the 1920s-1930s streetscape. The Heartland Museum also has a newly renovated and expanded community room available for rent and is home to the Clarion Historical Society and Clarion Arts Council. In 2013 another building was built to house more antique farm machinery.

The 4-H Schoolhouse Museum is another attraction located on Highway 3 in Gazebo Park. The restored Rock Island Depot is used as the office for the Clarion Chamber & Development.

The Clarion Public Library was built in 1908. In 2009, an addition to the north side of the building was added. Also, a renovation project was finished that included doubling the square footage of the building. During the renovation, the original 1908 ceiling was revealed, along with a small attic that contained relics from the early 1900s.

In 2006 the new Clarion Aquatic Center was completed and opened in June. The aquatic center features 2 large slides, 2 deep-water drop-slides, zero-depth beach-style entrance with play features, 6-lane lap swimming area, and 2 diving boards. Clarion has 3 city parks - the Aquatic Center Park (locally referred to as "Tornado Park") which is located next to the Aquatic Center, Firemen's Park, and Gazebo Park. Lake Cornelia is located just North of town and features a natural glacier lake, large conservation park including modern camping sites. There is a new walking/biking trail around Lake Cornelia with another one, the Vita Course, located in Northeast Clarion. Clarion also has a skating rink and newly renovated, community run digital movie theatre. 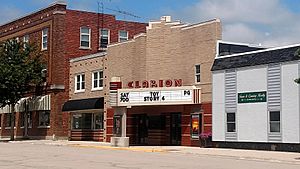 Clarion's downtown features several buildings built in the 19th century. The center of the business district is the Wright County Courthouse, listed on the National Register of Historic Places. Plans are currently underway to renovate the courtroom to both modernize the facility and restore some of the original architecture.

Clarion has seen industrial expansion creating additional jobs. The development of the Clarion Industrial Park has led to the opening of a new factory, Clarion Packaging LLC, that has built a 114,000 sq ft (10,600 m2). egg carton factory that manufactures egg cartons out of recycled paper. The project added 120 new jobs to the community. There is a 12,000 sq ft (1,100 m2). speculative building available. The industrial park features a new paved access road, sewer and water on site, railroad on site, and is conveniently located just 2 blocks south of Highway 3.

Hagie Manufacturing is located on Central Avenue West. The company, incorporated by Ray Hagie, is responsible for designing and building the first high clearance sprayer. Today, the Clarion company boasts of manufacturing the fastest self-propelled sprayers in the world. The sprayers also feature 120-foot (37 m) long booms, the new standard in the industry. Hagie has expanded significantly in the past three years, building a 75,000 square foot addition to their facility in 2008. They also acquired the former Meredith Corporation facilities which added an entirely new campus. Hagie is one of the leading employers in the Clarion area. 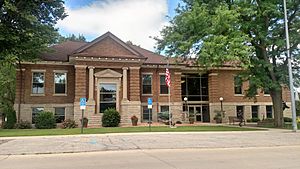 The Clarion Public Library was built in 1908. In 2009, an addition to the north side of the building was added. Also, a renovation project was finished that included doubling the square footage of the building. During the renovation, the original 1908 ceiling was revealed, along with a small attic that contained relics from the early 1900s.

All content from Kiddle encyclopedia articles (including the article images and facts) can be freely used under Attribution-ShareAlike license, unless stated otherwise. Cite this article:
Clarion, Iowa Facts for Kids. Kiddle Encyclopedia.