Castana is a city in Monona County, Iowa, United States. The population was 107 at the time of the 2020 census.

A post office has been in operation at Castana since 1865. Castana was platted in 1886 by the railroad. The name Castana was selected by an early settler who believed it to be a Latin word meaning "chestnuts". 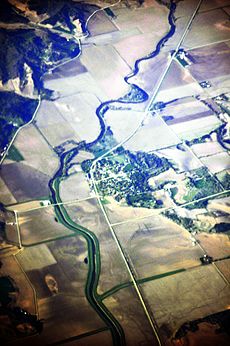 The Western Iowa Experimental farm, a part of Iowa State University, is located just outside Castana. Here research is carried out in beef cattle, swine, forage and the effects of fertiliser on soya beans and corn. 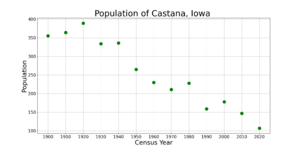 The population of Castana, Iowa from US census data

There were 68 households, of which 29.4% had children under the age of 18 living with them, 41.2% were married couples living together, 8.8% had a female householder with no husband present, 4.4% had a male householder with no wife present, and 45.6% were non-families. 42.6% of all households were made up of individuals, and 7.3% had someone living alone who was 65 years of age or older. The average household size was 2.16 and the average family size was 2.89.

The community was originally a part of the Castana Consolidated Independent School District. The lower level of a building constructed in 1888 was the first classroom area. In 1897 a permanent $12,000, three story Castana Normal School building opened. An addition was completed in Summer 1911. The school district acquired a teacher's residence hall in 1920; that building also housed classes for several grades.

In 1935 and 1936 the Castana Consolidated School, the final school building in Castana, was built by the Sioux City company Beuttler & Arnold, funded by a $36,818 Public Works Administration grant and a $45,000 bond. It opened for classes on September 7, 1936. In November of that year the school district sold the previous school to the city government for $1,000, and the building was razed. The 1935–1936 school was renamed the Castana Community School in 1954.

All content from Kiddle encyclopedia articles (including the article images and facts) can be freely used under Attribution-ShareAlike license, unless stated otherwise. Cite this article:
Castana, Iowa Facts for Kids. Kiddle Encyclopedia.