Breda is a city in Carroll County, Iowa, United States. The population was 500 at the 2020 census.

Breda had its start in the year 1877 by the building of the Maple branch of the Chicago and North Western railroad through that territory. It was named after the Dutch city of Breda by a settler native to that place.

According to the United States Census Bureau, the city has a total area of 0.74 square miles (1.92 km2), all of it land. 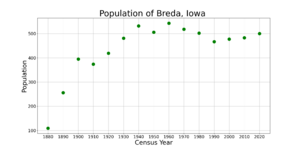 The population of Breda, Iowa from US census data

There were 211 households, of which 32.7% had children under the age of 18 living with them, 53.1% were married couples living together, 5.7% had a female householder with no husband present, 5.2% had a male householder with no wife present, and 36.0% were non-families. 32.2% of all households were made up of individuals, and 15.7% had someone living alone who was 65 years of age or older. The average household size was 2.29 and the average family size was 2.90.

The public school district is the Carroll Community School District, which operates schools in Carroll. The area Catholic school is the Kuemper Catholic School System, which is also in Carroll.

Previously Breda had its own Catholic schools, with the first such institution opening in 1884. St. Bernard Grade School opened in 1903, and St. Bernard High School opened in the St. Bernard building in 1927. The high school received its own building in 1951. St. Bernard High consolidated into Kuemper Catholic High in 1979. St. Bernard Elementary occupied the former high school building while the former elementary building closed that year; that building was demolished in 1980, and by 2014 two houses had been built in its place. Christ the King School formed in 1983 as a merger of St. Bernard along with Mount Carmel, Lidderdale and Maple River Catholic schools. The Christ the King School, along with the Holy Trinity Catholic grade school, consolidated into Kuemper Catholic System in 2003.

All content from Kiddle encyclopedia articles (including the article images and facts) can be freely used under Attribution-ShareAlike license, unless stated otherwise. Cite this article:
Breda, Iowa Facts for Kids. Kiddle Encyclopedia.