Carroll is a city in, and the county seat of, Carroll County, Iowa, United States, along the Middle Raccoon River. The population was 10,321 in the 2020 census.

Carroll was laid out in 1867. It took its name from Carroll County, named in honor of Charles Carroll of Carrollton, Maryland. He was the only Roman Catholic to sign the Declaration of Independence.

In 1869, the centrally located railroad town of Carroll City was selected as the county seat, replacing, with some protest, Carrollton. Later a $4,000 courthouse was constructed on the town square. This building was used until it burned to the ground in 1886. The vaults and records were undamaged, however, and moved to temporary housing in the Joyce Building and Drees' Music Hall.

The following winter a $40,000 bond issue was approved toward the construction of a new, permanent courthouse. The impressive building was built on the northwest corner of the square (the parking lot of the current courthouse). The stone and brick building, complete with a clock tower, was used for more than three-quarters of a century. It was replaced by a modern-looking building in 1965.

A $750,000 bond issue was used to construct and equip the new courthouse. This building was officially dedicated on September 24, 1966. The highlight of the dedication ceremony was the opening of the boxes sealed in the cornerstone of the old courthouse. The bell from the previous courthouse clock tower sits on the courthouse grounds. Source: Marie Hackett, Curator of the Carroll County Historical Museum, 1991 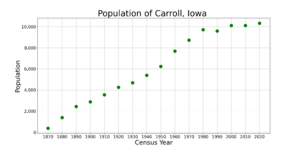 The population of Carroll, Iowa from US census data

The public school district is the Carroll Community School District.

All content from Kiddle encyclopedia articles (including the article images and facts) can be freely used under Attribution-ShareAlike license, unless stated otherwise. Cite this article:
Carroll, Iowa Facts for Kids. Kiddle Encyclopedia.