Carroll County is a county located in the U.S. state of Iowa. As of the 2020 census, the population was 20,760. Its county seat is Carroll. The county is named in honor of Charles Carroll of Carrollton, signer of the Declaration of Independence.

Carroll County was formed on January 15, 1851 from sections of Pottawattamie County. It was named after Charles Carroll of Carrollton, Maryland, the only Roman Catholic and longest-living signer of the Declaration of Independence. In 1855, the county government was established in Carrolton and in 1858, the first courthouse was built. In 1869, the seat was moved to Carroll City (today Carroll) which was centrally located and connected to the Chicago and North Western Transportation Company. The courthouse was destroyed in 1886 by fire. The present courthouse was erected in 1965. However the courthouse is set to go under construction in the near future 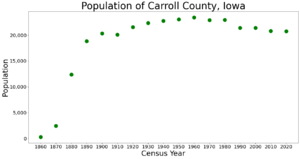 Population of Carroll County from US census data

The population ranking of the following table is based on the 2010 census of Carroll County.

All content from Kiddle encyclopedia articles (including the article images and facts) can be freely used under Attribution-ShareAlike license, unless stated otherwise. Cite this article:
Carroll County, Iowa Facts for Kids. Kiddle Encyclopedia.