Calhoun County is a county located in the U.S. state of Iowa. As of the 2020 census, the population was 9,927. Its county seat is Rockwell City.

Calhoun County was formed on January 15, 1851 from open land originally named Fox County. It was renamed in 1853 after the seventh US Vice President secessionist John C. Calhoun. When the tracks of the Illinois Central Railroad were laid through the county in 1870, the county seat was moved from Lake City to Rockwell City. The first train reached Rockwell City on August 7, 1882 and the population count doubled in the same year. The first courthouse, built of wood, burned to the ground in 1884 and the county government moved into a nearby hotel. In 1913, the current courthouse was built. 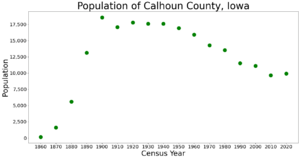 Population of Calhoun County from US census data

The population ranking of the following table is based on the 2010 census of Calhoun County.

All content from Kiddle encyclopedia articles (including the article images and facts) can be freely used under Attribution-ShareAlike license, unless stated otherwise. Cite this article:
Calhoun County, Iowa Facts for Kids. Kiddle Encyclopedia.