Adair is a city in Adair and Guthrie counties in the U.S. state of Iowa. The population was 791 at the 2020 census.

The Rock Island Railroad was built through the area in 1868. This led to the area being known as Summit Cut. This is in reference to the ridge that forms the watershed divide between the Missouri River and the Mississippi River. The town officially became Adair on August 20, 1872 when it was incorporated with the county. The town is named after General John Adair, a general in the War of 1812 who later became the 8th governor of Kentucky. Adair was the scene of the first successful train robbery in the American West when on July 21, 1873 the James-Younger Gang (led by Jesse James) took US $3,000 from the Rock Island Express after derailing it southwest of the town. The derailment killed the engineer.

Adair is recognizable from Interstate 80 by its tall yellow "smiley-face" water tower. Humorously known as "the happiest town on Earth", its roadsign warmly greets visitors with, "Welcome to Adair; it'll make you smile". Some of the local businesses incorporate the smiley-face tower image into their company logos. 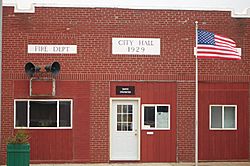 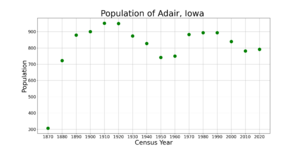 The population of Adair, Iowa from US census data

There were 361 households, of which 24.9% had children under the age of 18 living with them, 48.2% were married couples living together, 7.8% had a female householder with no husband present, 1.7% had a male householder with no wife present, and 42.4% were non-families. 38.8% of all households were made up of individuals, and 19.4% had someone living alone who was 65 years of age or older. The average household size was 2.16 and the average family size was 2.88.

All content from Kiddle encyclopedia articles (including the article images and facts) can be freely used under Attribution-ShareAlike license, unless stated otherwise. Cite this article:
Adair, Iowa Facts for Kids. Kiddle Encyclopedia.