Keosauqua ( KEE-ə-SAW-kwə) is a city in Van Buren County, Iowa, United States. The population was 936 at the time of the 2020 census. It is the county seat of Van Buren County. 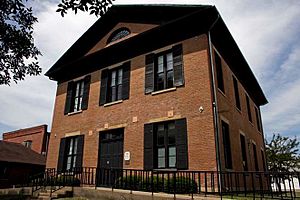 Van Buren County courthouse in Keosauqua. The building is on the National Register of Historic Places and is the second-oldest courthouse in continuous use in the U.S.

Keosauqua was laid out in 1839. The word Keosauqua derives from the Meskwaki and Sauk name for the Des Moines River, "Ke-o-saw-qua", which literally translates as "Bend in the River". The Hotel Manning, a three story relic from the Des Moines River's steamboat days, is Keosauqua's most notable landmark. Also located in Keosauqua are many other notable historic sites. The 1847 Pearson House was a stop on the underground railroad.

The Honey War was fought south of Keosauqua in what is now Lacey-Keosauqua State Park. Lacey-Keosauqua is one of the largest state parks in Iowa and was built by the Civil Conservation Corps during the Great Depression. Keosauqua hosts its annual Fall Festival the second full weekend in October.

There were 459 households, of which 20.7% had children under the age of 18 living with them, 43.1% were married couples living together, 7.4% had a female householder with no husband present, 4.1% had a male householder with no wife present, and 45.3% were non-families. 41.6% of all households were made up of individuals, and 23.3% had someone living alone who was 65 years of age or older. The average household size was 2.06 and the average family size was 2.79.

Keosauqua is home to the Van Buren Warriors at Van Buren High School; Harmony High School consolidated into it at the end of the 2015–2016 school year as part of a grade-sharing arrangement. In 2018 the Van Buren district voted to merge with the Harmony Community School District.

All content from Kiddle encyclopedia articles (including the article images and facts) can be freely used under Attribution-ShareAlike license, unless stated otherwise. Cite this article:
Keosauqua, Iowa Facts for Kids. Kiddle Encyclopedia.