Van Buren County ( VAN-_-BEWR-ən) is a county located in the U.S. state of Iowa. As of the 2020 census the population was 7,203, making it the state's tenth-least populous county. The county seat is Keosauqua, which contains the oldest continuously operational courthouse in the state of Iowa, and second oldest in the United States. 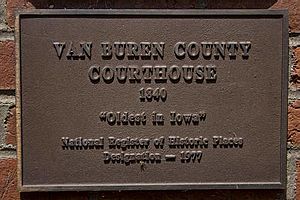 Plaque on the Van Buren County courthouse, indicating its age and historic status.

Van Buren County was formed on December 7, 1836 as a part of Wisconsin Territory, and was split off from Des Moines County. It was named for President Martin Van Buren. It became a part of Iowa Territory (later the state of Iowa) when that territory was organized on July 4, 1838.

The county's courthouse was built in September 1843 in the style of Greek Revival and stands as Iowa's oldest, and the nation's second oldest, courthouse in operation. 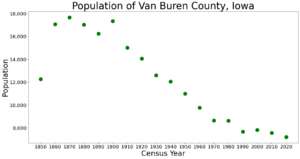 Population of Van Buren County from US census data 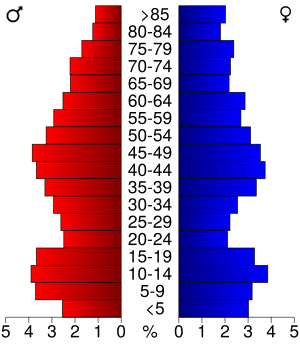 According to the 1850 US Census Records.

The population ranking of the following table is based on the 2010 census of Van Buren County.

All content from Kiddle encyclopedia articles (including the article images and facts) can be freely used under Attribution-ShareAlike license, unless stated otherwise. Cite this article:
Van Buren County, Iowa Facts for Kids. Kiddle Encyclopedia.