Scotland County is located in the northeastern portion of the U.S. state of Missouri. As of the 2010 census, the population was 4,843, making it the fifth-least populous county in Missouri. Its county seat is Memphis. The county was organized January 29, 1841, and named for Scotland.

Scotland County was organized by an act of the Missouri General Assembly on January 29, 1841. At first its boundaries contained all the land now known as Knox County as well, but another act by the General Assembly in 1843 divided it off. Stephen W. B. Carnegy suggested that the county be named after his native country of Scotland. He also gave several settlements in the area Scottish names.

The first white settlement in Scotland County was in 1833 by brothers Levi and George Rhodes and their families near a location known as "Sand Hill". Sand Hill was in the southern part of the county, about twelve miles from present-day Memphis. A general store was opened there around 1835 by James l. Jones, who also served as Scotland County's first sheriff.

Slavery, while never as prevalent in Scotland County as in others further south in the state's Little Dixie region, did exist from the county's earliest days. Robert T. Smith brought the first slaves, a group of three, to the county in 1834. In 1850 Scotland County had 157 slaves or other "non-free people of color". However, by the 1860 census that number was reduced to 131.

Farming was the primary economic lifeblood of Scotland County from its earliest times. Once the stands of timber were cleared and the tough prairie grass was plowed aside, settlers found rich soil. Between 1850 and 1880 the number of farms in the county grew from 334 to 1,994. The value of the farmland, in 1880 dollars, was over $3.72 million. Corn was the major cash crop, followed by oats, wheat, and potatoes.

Scotland County was the scene of three notable engagements during the American Civil War. The first happened at Etna on July 21, 1861. The 1st Northeast Missouri Home Guards under Colonel David Moore with assistance of additional units from Iowa and Illinois attacked pro-Confederate Missouri State Guard (MSG) forces using Etna as a training and resupply point. The action was part of General Nathaniel Lyon's efforts to clear "rebels" from rural Missouri. After a brief battle the MSG forces, mostly lightly-armed cavalry, were driven from the town and surrounding areas of Scotland County and Moore's unit returned to its main base at Athens, Missouri.

On July 13, 1862 Confederate Colonel Joseph C. Porter approached Memphis, Missouri in four converging columns totalling 125–169 men and captured it with little or no resistance. They first raided the Federal armory, seizing about a hundred muskets with cartridge boxes and ammunition, and several uniforms. The Confederate rounded up all adult males, who were taken to the court house to swear not to divulge any information about the raiders for forty-eight hours. Porter freed all militiamen and suspected militiamen to await parole, a fact noted by champions of his character. Citizens expressed their sympathies variously; Porter gave safe passage to a physician, an admitted supporter of the Union, who was anxious to return to his seriously ill wife. A verbally abusive woman was threatened with a pistol by one of Porter’s troops, perhaps as a bluff. Porter’s troops entered the courthouse and destroyed all indictments for horse theft; the act is variously understood as simple lawlessness, intervention on behalf of criminal associates, or interference with politically motivated, fraudulent charges.

At Memphis, a key incident occurred which would darken Colonel Porter’s reputation, and which his detractors see as part of a consistent behavioral pattern which put him and his men beyond the norms of warfare. According to the "History of Shelby County,” which is generally sympathetic to Porter, “Most conceded that Col. Porter’s purpose for capturing Memphis, MO. was to seize Dr. Wm. Aylward, a prominent Union man of the community.” Aylward was captured during the day by Captain Tom Stacy's men and confined to a house. Stacy was generally regarded as a genuine bushwhacker, with his company called "the chain gang" by the other members of Porter's command due to their behavior. After rousing Doctor Aylward overnight and removing him from his home, ostensibly to see Porter, guards claimed that he escaped. However, witnesses reported hearing the sounds of a strangling, and his body was found the next day, with marks consistent with strangulation. Supporters of Porter attribute the murder of Aylward to Stacy. However, a Union gentleman who came to inquire about Aylward and a captured officer before the discovery of the body stated that when he asked Porter about Aylward, the response was, "He is where he will never disturb anybody else." 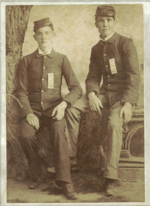 The next engagement in the county took place on July 18, 1862. Union Colonel (later General) John McNeil had been pursuing Porter and his forces across northeast Missouri for some time. When hearing of the capture of Memphis, McNeil sent a detachment of three companies (C, H, and I), about three hundred men, of Merrill's Horse under Major John Y. Clopper from Newark, Missouri to rescue the town. Colonel Porter and his Confederate forces, their strength estimated at anywhere between one hundred twenty-five men to upwards of six hundred, planned to ambush the Federals. This would become known as the "Battle of Vassar Hill" in the History of Scotland County. Porter himself called it “Oak Ridge,” and Federal forces called it “Pierce’s Mill". By whatever name, it happened approximately ten miles southwest of Memphis on the south fork of the Middle Fabius River.

Porter's men were concealed in brush and stayed low when the Federals stopped to fire prior to each charge. Porter's men held their fire until the range was very short, increasing the lethality of the volley. Clopper was in the Federal front, and out of 21 men of his advance guard, all but one were killed or wounded. The Federals made at least seven mounted charges doing little but adding to the body count. A battalion of roughly 100 men of the 11th Missouri State Militia Cavalry under Major Rogers arrived and dismounted. While Clopper claimed to have driven the enemy from the field after this, eye witness Dr. Joseph Mudd said that the Union troops instead fell back and ended the engagement leaving Porter in possession of the field until he withdrew. Clopper's reputation suffered as a result of his poor tactics. Before the final charge one company officer angrily asked, "Why don't you dismount those men and stop murdering them?" Union casualties were about 24 killed and mortally wounded (10 from Merrill's Horse and 14 from the 11th MSM Cavalry), and perhaps 59 wounded (24 from Merrill's Horse, and 35 from the 11th MSM Cavalry.) Porter's loss was as little as three killed and five wounded according to Mudd, or six killed, three mortally wounded, and 10 wounded left on the field according to the Shelby County History.

In the 1880s, a group called the The Tax-payers' Association of Scotland County formed to resist paying local taxes and to intimidate any potential bidders on horses and mules that had been seized to cover those taxes. The handling of county debt collection went to the Supreme Court in Findlay v. McAllister. 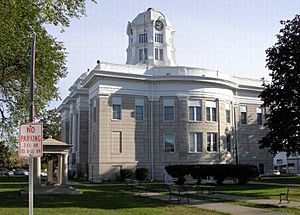 Another view of the Scotland County courthouse.

All content from Kiddle encyclopedia articles (including the article images and facts) can be freely used under Attribution-ShareAlike license, unless stated otherwise. Cite this article:
Scotland County, Missouri Facts for Kids. Kiddle Encyclopedia.