Memphis is a city in Scotland County, Missouri, United States. The population was 1,822 at the 2010 census. It is the county seat of Scotland County. Memphis is located adjacent to U.S. Highway 136, east of Lancaster, and west of Kahoka. 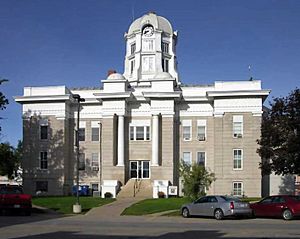 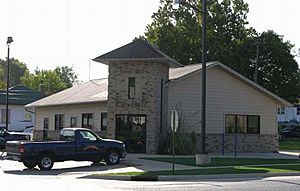 Although Scotland County was organized by an act of the Missouri General Assembly on January 29, 1841 the town of Memphis did not come to be until more than two years later. County commissioners met at Sand Hill on May 15, 1843 to select the county seat. A spot near the geographical center of the county was chosen, and after some debate, was named Memphis, after the ancient city of Memphis, Egypt. The name had been previously used by a U.S. Post Office that operated on the North Fabius River a short distance away. The land for the town, about fifty acres, was donated to the county by early settler Samuel Cecil. After being laid out in town lots the original plat of Memphis was filed with county court on October 11, 1843. However a few homes already existed on the site and had for several years, the first being a log cabin constructed in 1835 by Burton Tompkins.

Scotland County's first courthouse, a two-story brick structure, was completed in June, 1845 at a cost of $1,500 dollars. However just a decade later the building was declared unsafe by the county court and a second, larger courthouse was constructed in the middle of the town square in 1856 at a cost of $19,500. The second building served the county well until the turn of the 20th century, but at just forty feet by seventy feet it was becoming increasingly cramped. It was condemned in May, 1905 and razed in early 1907. The current Scotland County courthouse was constructed between October, 1907 and July, 1908 at a cost of $50,000.

Scotland County was the scene of two notable engagements during the American Civil War. On July 13, 1862 Confederate Colonel Joseph C. Porter approached Memphis in four converging columns totalling 125–169 men and captured it with little or no resistance. They first raided the Federal armory, seizing about a hundred muskets with cartridge boxes and ammunition, and several uniforms. The Confederate rounded up all adult males, who were taken to the court house to swear not to divulge any information about the raiders for forty-eight hours. Porter freed all militiamen or suspected militiamen to await parole, a fact noted by champions of his character. Citizens expressed their sympathies variously; Porter gave safe passage to a physician, an admitted supporter of the Union, who was anxious to return to his seriously ill wife. A verbally abusive woman was threatened with a pistol by one of Porter’s troops, perhaps as a bluff. Porter’s troops entered the courthouse and destroyed all indictments for horse-theft; the act is variously understood as simple lawlessness, intervention on behalf of criminal associates, or interference with politically motivated, fraudulent charges.

At Memphis, a key incident occurred which would darken Colonel Porter’s reputation, and which his detractors see as part of a consistent behavioral pattern which put him and his men beyond the norms of warfare. According to the "History of Shelby County,” which is generally sympathetic to Porter, “Most conceded that Col. Porter’s purpose for capturing Memphis, MO. was to seize Dr. Wm. Aylward, a prominent Union man of the community.” Aylward was captured during the day by Captain Tom Stacy's men and confined to a house. Stacy was generally regarded as a genuine bushwhacker, with his company called "the chain gang" by the other members of Porter's command due to their behavior. After rousing Doctor Aylward overnight and removing him from his home, ostensibly to see Porter, guards claimed that he escaped. However, witnesses reported hearing the sounds of a strangling, and his body was found the next day, with marks consistent with hanging or strangulation. Supporters of Porter attribute the murder of Aylward to Stacy. However, a Union gentleman who came to inquire about Aylward and a captured officer before the discovery of the body stated that when he asked Porter about Aylward, the response was, "He is where he will never disturb anybody else."

In the late 1920s, Memphis was the birthplace of The Pheasant Aircraft Company.

There were 813 households of which 27.2% had children under the age of 18 living with them, 41.5% were married couples living together, 10.9% had a female householder with no husband present, 4.9% had a male householder with no wife present, and 42.7% were non-families. 39.1% of all households were made up of individuals and 20% had someone living alone who was 65 years of age or older. The average household size was 2.15 and the average family size was 2.85.

All content from Kiddle encyclopedia articles (including the article images and facts) can be freely used under Attribution-ShareAlike license, unless stated otherwise. Cite this article:
Memphis, Missouri Facts for Kids. Kiddle Encyclopedia.