Bode is a city in Humboldt County, Iowa, United States. The population was 302 at the 2020 census.

Bode had its start in the year 1881 by the building of the Burlington, Cedar Rapids and Northern Railway through that territory.

According to the United States Census Bureau, the city has a total area of 0.41 square miles (1.06 km2), all of it land. 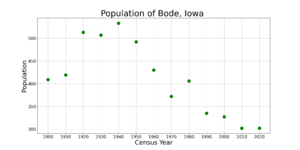 The population of Bode, Iowa from US census data

There were 130 households, of which 29.2% had children under the age of 18 living with them, 42.3% were married couples living together, 14.6% had a female householder with no husband present, 6.9% had a male householder with no wife present, and 36.2% were non-families. 31.5% of all households were made up of individuals, and 10.8% had someone living alone who was 65 years of age or older. The average household size was 2.32 and the average family size was 2.84.

The district previously had a grade sharing agreement with the Gilmore City–Bradgate Community School District. Under that agreement Bode was the home of Twin River Valley High School, nicknamed the 'Thunder', the High School for the Twin Rivers School District and the Gilmore City–Bradgate district. The athletic teams (football, volleyball, boys and girls basketball, wrestling, track, golf, baseball and softball) are usually in the lower classes for sports due to the school's small enrollment. TRV is currently in talks with the Humboldt or West Bend-Mallard High Schools for sharing of education and/or sports.

All content from Kiddle encyclopedia articles (including the article images and facts) can be freely used under Attribution-ShareAlike license, unless stated otherwise. Cite this article:
Bode, Iowa Facts for Kids. Kiddle Encyclopedia.