Charles City is a city in Floyd County, Iowa, United States. The population was 7,652 at the 2010 census a decrease of 160, or 2%, from 7,812 at the 2000 census. It is the county seat of Floyd County. Charles City is a significant commercial and transportation center for the area, located on U.S. Highways 18 and 218, Iowa Highway 14, and the Canadian National and Iowa, Chicago and Eastern Railroads.

Located on the site of a Winnebago Indian village, Charles City was originally named "Charlestown" for the son of the first-known white settler to the area, Joseph Kelly. Upon his 1851 arrival to the area, Kelly envisioned the site, with its ample supply of water from the Cedar River and adjacent timberlands, as an ideal location for a town. By 1852, twenty-five other settler families had joined Kelly in that vision and a community was born. The town name changed, first to "St. Charles" and then to "Charles City," to avoid duplication of other Iowa town names.

Charles City became the county seat after Floyd County was established in 1851 and officially organized in 1854. Floyd County itself was named for Sergeant Charles Floyd of the Lewis and Clark Expedition. 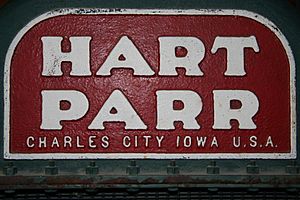 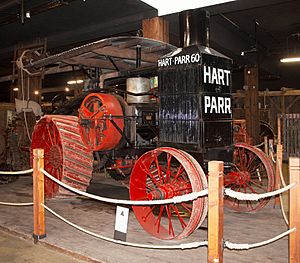 Charles City is known for the role it played in the history of the American tractor. A native son Charles Walter Hart, whose father owned three local farms, met Charles H. Parr in college. After graduating from the University of Wisconsin, Hart and Parr developed a two-cylinder gasoline engine and set up their business in Charles City in 1897. It was here in 1901 the term "tractor" with Latin roots and a combination of the words traction and power was first coined by Hart and Parr. In 1903 the firm built fifteen "tractors", the first successful production-model tractor line in the U.S. The 14,000 pound No. 3 is the oldest surviving internal combustion engine tractor in the United States and is on display at the Smithsonian National Museum of American History in Washington D.C. In 1929, Hart-Parr was one of the four companies that merged to form Oliver Farm Equipment Company and finally the White Farm-New Idea Equipment Co. At its peak in the mid-1970s, the sprawling plant complex encompassed 23 acres and employed nearly 3,000 workers. The 1980s farm crisis and other economic pressures led to the closing of the plant in 1993. As of 2013, the vacant site stands ready for re-use. 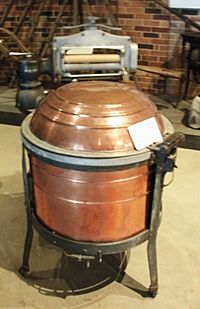 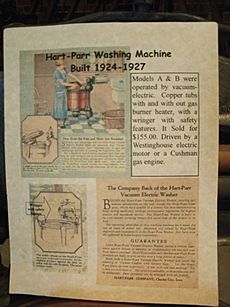 Although more famously known for producing tractors, the Hart-Parr company also made some of the first washing machines. Selling for $155.00 in the 1920s, the buyer had the option of ordering either an electric or gasoline engine

The Floyd County Historical Museum preserves the plant's history and memories in an extensive collection of documents and artifacts.

National women’s rights leader Carrie Lane Chapman Catt spent her girlhood years on a farm south of Charles City. Catt is well known as a prominent leader of the woman's suffrage movement and her efforts in helping to pass the 19th Amendment ratified on August 18, 1920, granting women the right to vote. Carrie Catt was also the founder of the League of Women Voters. Her home and a visitor’s center are open for public viewing.

On June 9, 2008, record flooding caused major damage in the town. Charles City's historic suspension bridge, which crossed over the Cedar River, collapsed as well as destroyed numerous homes around the city. The City of Charles City has since received FEMA and state funding for a brand new bridge in place of the old suspension bridge. A new bridge opened in early 2010.

Charles City is the location of the Dr. Alvin L. Miller House, a Usonian home designed by Frank Lloyd Wright.

Charles City has been devastated by tornadoes many times in its history.

In the summer of 1858 (possibly July 21) while still a village called St. Charles a "Terrific Tornado" was recorded. Although there was no deaths recorded the property value of buildings destroyed was into the thousands of dollars (1858 dollars), and the loss of crops was "must be beyond competation" according to the newspaper account.

In June 1908 (possibly June 7) a tornado destroyed or substantially damaged around 200 homes and barns. Residents W. R. Beck and a child were killed. The path of the tornado ran through the southeast part of the city missing the business district. Loss of property was fifty thousand dollars (1908 dollars).

Many people around the region remember Charles City as the site of a devastating F5 tornado that ripped through town on May 15, 1968, leaving 13 dead, hundreds injured, and massive destruction in its wake. One of the largest twisters ever recorded in the state, the storm destroyed much of the downtown – 256 businesses and 1,250 homes. Damage estimates of more than $20 million only told part of the story; the cost in human suffering was much greater than that.

There were 3,440 households of which 26.5% had children under the age of 18 living with them, 42.5% were married couples living together, 10.5% had a female householder with no husband present, 4.1% had a male householder with no wife present, and 42.9% were non-families. 38.7% of all households were made up of individuals and 19.1% had someone living alone who was 65 years of age or older. The average household size was 2.15 and the average family size was 2.86.

There were 3,339 households out of which 27.5% had children under the age of 18 living with them, 48.3% were married couples living together, 10.6% had a female householder with no husband present, and 37.6% were non-families. 34.1% of all households were made up of individuals and 18.7% had someone living alone who was 65 years of age or older. The average household size was 2.22 and the average family size was 2.82.

All content from Kiddle encyclopedia articles (including the article images and facts) can be freely used under Attribution-ShareAlike license, unless stated otherwise. Cite this article:
Charles City, Iowa Facts for Kids. Kiddle Encyclopedia.