Floyd County is a county located in the U.S. state of Iowa. As of the 2020 census, the population was 15,627. The county seat is Charles City.

Floyd County was established in 1854 and was named for Sgt. Charles Floyd of the Lewis and Clark Expedition, who died in 1804 near what is now Sioux City, Iowa, and who was the only member thereof to die on the Expedition.

The first school in the county was taught at Nora Springs in 1854. The second was opened at Charles City, the third at Floyd. Twelve years later there were 54 schools in the county, in September, 1875, there were 100 school-houses in Floyd County. 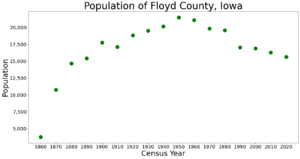 Population of Floyd County from US census data

The population ranking of the following table is based on the 2010 census of Floyd County.

All content from Kiddle encyclopedia articles (including the article images and facts) can be freely used under Attribution-ShareAlike license, unless stated otherwise. Cite this article:
Floyd County, Iowa Facts for Kids. Kiddle Encyclopedia.