Nora Springs is a city that is partially in Cerro Gordo and Floyd counties in the U.S. state of Iowa, along the Shell Rock River. The population was 1,369 at the time of the 2020 census. 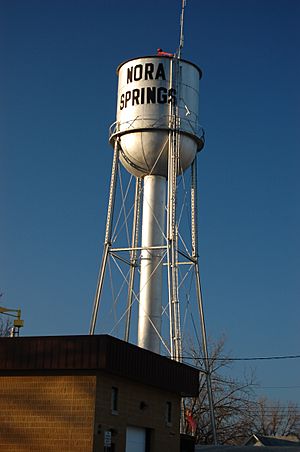 There were 577 households, of which 32.2% had children under the age of 18 living with them, 54.9% were married couples living together, 9.9% had a female householder with no husband present, 2.4% had a male householder with no wife present, and 32.8% were non-families. 28.4% of all households were made up of individuals, and 13.4% had someone living alone who was 65 years of age or older. The average household size was 2.37 and the average family size was 2.91.

The last week of June always marks a large celebration, Nora Springs Buffalo Days. Festivities include an impressive parade, entertainment in the park, food vendors, and inflatable rides. Other activities include a 5K Run/Walk and Bingo. There is a Softball Tournament held at the Nora Springs Intermediate School. At the Fire Department the Fireman's Ball is held from 9 p.m. to 1 a.

The high school, and half of the elementary students originating in the Manly, Hanlontown, and Plymouth region go to school in Manly from preschool to 3rd grade. While the middle schoolers, from Manly, Nora Springs, and the other half of the elementary kids originating near the Nora Springs, Rock Falls, and Portland area go to school in the Nora Springs building. Until 8th grade then they go to Manly where the High School is located. The school colors are black and blue, the mascot being a panther.

All content from Kiddle encyclopedia articles (including the article images and facts) can be freely used under Attribution-ShareAlike license, unless stated otherwise. Cite this article:
Nora Springs, Iowa Facts for Kids. Kiddle Encyclopedia.