Algona is the county seat of Kossuth County, Iowa, United States. The population was 5,487 at the 2020 census. Ambrose A. Call State Park is located two miles southwest of the city.

Algona was founded in 1854 and after the Algonquian word for "Algonquin waters".

Between 1869 and 1875 the community was the location of Algona College, an institution sponsored by the Methodist Church.

In 1894, Algona, along with other Iowa communities such as Dysart and Wesley, became part of the project known as the "Orphan Trains". As New York City saw booming immigration, it also inevitably saw a rise in the number of orphans in its asylums. Unable to provide adequate care for them, it saw fit to ship nearly 100,000 westward to start a new life with families across America. Algona itself welcomed nearly 100 orphans into the town, many of whom remained lifelong residents.

From 1902 to 1903, Algona played host to the Algona Brownies, a Negro League barnstorming team. Despite winning the league title in 1903, the team disbanded that same year.

The Henry Adams Building, designed by Louis Sullivan in 1913 is located at the northwest corner of East State and Moore streets. Although not designed to be a bank, the building is nonetheless considered to be one of Sullivan's "Jewell Boxes," a series of banks built in the Midwest from 1909 through 1919.

Algona was the site of a German prisoner of war camp during World War II. From 1943 to 1946 Camp Algona housed nearly 10,000 prisoners, many of whom were put to work on farms owned by Americans who were fighting overseas. A museum now commemorates the camp's history and features a nativity scene built by the POWs.

A destructive F3 tornado killed two people and destroyed a large part of Algona on June 28, 1979 about 7:15 PM. The tornado moved in a south-southeast direction through Algona. Severe damage was done to the central business district and a number of homes were rendered uninhabitable. Near F4 damage was reported in some locations. There was about 15 minutes warning and the tornado sirens were sounded well before the arrival of the tornado. The fact that it was still daylight also contributed to the relatively low death count from this destructive storm.

In 2003, Algona drew national attention when it announced the purchase of the world's largest Cheeto. It was meant as a plan to bring tourism to the town to see the Cheeto by a local radio DJ. 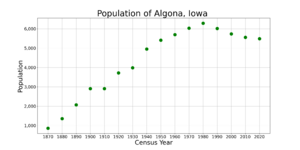 The population of Algona, Iowa from US census data

There were 2,499 households, of which 25.2% had children under the age of 18 living with them, 48.3% were married couples living together, 7.9% had a female householder with no husband present, 3.6% had a male householder with no wife present, and 40.2% were non-families. 36.3% of all households were made up of individuals, and 18.1% had someone living alone who was 65 years of age or older. The average household size was 2.16 and the average family size was 2.79.

The Catholic school system is made up of Bishop Garrigan High School (named after the first bishop of the Catholic Diocese of Sioux City) and Seton Elementary (named for St. Elizabeth Ann Seton).

All content from Kiddle encyclopedia articles (including the article images and facts) can be freely used under Attribution-ShareAlike license, unless stated otherwise. Cite this article:
Algona, Iowa Facts for Kids. Kiddle Encyclopedia.