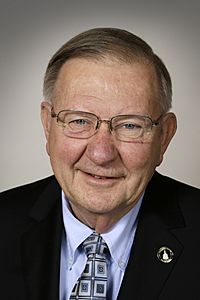 Curt Hanson (1943 – June 16, 2017) was an American politician. He was born in Algona, Iowa. Curt was a member of the Iowa House of Representatives. A member of the Democratic Party, he served in the Iowa House from 2009 until his death in 2017, representing the 90th and 82nd Districts.

All content from Kiddle encyclopedia articles (including the article images and facts) can be freely used under Attribution-ShareAlike license, unless stated otherwise. Cite this article:
Curt Hanson Facts for Kids. Kiddle Encyclopedia.