On October 14, 1966, an F5 tornado ripped apart the community, destroying or damaging about 600 homes and 75 businesses. Six people were killed and large swaths of the town were left in ruins. On June 12, 2013, an F3 tornado affected the northern sections of town by damaging or destroying several businesses and homes.

Belmond was impacted by major flooding in the June 2008 Midwest floods, along with many other parts of the state of Iowa.

According to the United States Census Bureau, the city has a total area of 2.85 square miles (7.38 km2), all of it land. 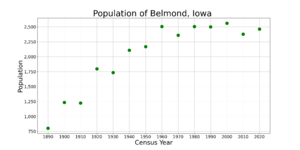 The population of Belmond, Iowa from US census data

There were 1,047 households, of which 26.9% had children under the age of 18 living with them, 50.3% were married couples living together, 7.8% had a female householder with no husband present, 3.8% had a male householder with no wife present, and 38.0% were non-families. 35.1% of all households were made up of individuals, and 19.2% had someone living alone who was 65 years of age or older. The average household size was 2.21 and the average family size was 2.82.

Belmond maintains several well-kept city parks. In recent years the Belmond community has built a new fire station, city hall, walking trail, and a new clinic. There are plans to build a new water treatment facility. The Iowa River flows through Belmond, past a river park. Belmond has a country club and golf course. Luick Memorial Swimming Pool features a giant water slide. The City plans to improve the pool by creating a more modern aquatic center. The Franklin Grove Heritage Trail is an asphalt trail that runs through town. There are plans to build a walking trail from Mason City to Belmond that could eventually connect to the Three Rivers Trail in Eagle Grove.

The Belmond Housing Council and the City of Belmond established the Dumond Estates 40-lot housing subdivision in 1997. There are two housing incentive programs available in Belmond, which emphasize building in Dumond Estates.

Belmond–Klemme Community School District serves Belmond. The district formed on July 1, 1994, with the merger of the Belmond and Klemme districts.

All content from Kiddle encyclopedia articles (including the article images and facts) can be freely used under Attribution-ShareAlike license, unless stated otherwise. Cite this article:
Belmond, Iowa Facts for Kids. Kiddle Encyclopedia.