Gowrie is a city in Webster County, Iowa. The population was 952 at the time of the 2020 census. The town has a swimming pool, golf course, athletic stadium, and curb-and-gutter throughout the community.

A post office called Gowrie has been in operation since 1871. The city was named after Gowrie, in Scotland.

According to the United States Census Bureau, the city has a total area of 1.45 square miles (3.76 km2), all of it land. 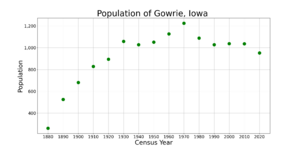 The population of Gowrie, Iowa from US census data

There were 442 households, of which 33.0% had children under the age of 18 living with them, 47.1% were married couples living together, 12.4% had a female householder with no husband present, 4.1% had a male householder with no wife present, and 36.4% were non-families. 33.3% of all households were made up of individuals, and 19.9% had someone living alone who was 65 years of age or older. The average household size was 2.28 and the average family size was 2.88.

Each year, the town hosts the Gowrie 4 July Celebration, which draws thousands of people from around the state for the parade, fireworks, carnival, and bandshell performances. The parade is the longest running consecutive parade in Iowa, beginning in 1873 and continuing each year since. Crowds of 10,000-20,000 are common. Some highlights of the past include a visit by President Richard Nixon's daughter, Patricia, in 1968, the Bill Riley Talent Show for several years, an appearance by the O's Gold Famous 40 Horse Hitch in 1976, and a concert by opera singer Simon Estes in 2011.

Several churches stand in testament to a strong faith community, including both Methodist and Lutheran churches. Zion Evangelic Lutheran Church, a magnificent open-arched structure, was built by hometown business, Johnson Lumber Company, owned by Axel and Carl Johnson, and was completed in March, 1931.

All content from Kiddle encyclopedia articles (including the article images and facts) can be freely used under Attribution-ShareAlike license, unless stated otherwise. Cite this article:
Gowrie, Iowa Facts for Kids. Kiddle Encyclopedia.