Clearfield is a city in Taylor and Ringgold counties in the U.S. state of Iowa. The population was 278 at the time of the 2020 census.

Clearfield was platted in 1881 when the Humeston and Shenandoah Railroad was being built through that territory. The town was incorporated in 1882.

According to the United States Census Bureau, the city has a total area of 1.26 square miles (3.26 km2), all of it land. Clearfield is known for driving the shuttle buses at the famous Iowa State Fair. Clearfield High School was closed in 1986. The nickname "Orioles" is still used for the towns' little league teams. The grocey store E and E Grocery closed in 2003,but the owners opened up a very nice Bar and Grill named Mickey D's. The gas station Spurrier's then started selling a few grocery items but they closed in 2007. Taygold Co-op saw a need in the community and opened up a tire and Lube center in part of the old Spurrier's building and built onto the building and added a convenience store called Taygold Community Store in July 2011. It has many convenience items including pizza and sandwiches plus all beer, cigaretees, and grocery items. On December 24, 2011 an ATM was added to the store by the State Savings Bank in Clearfield. 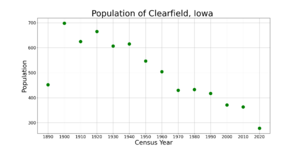 The population of Clearfield, Iowa from US census data

There were 153 households, of which 22.2% had children under the age of 18 living with them, 43.8% were married couples living together, 7.8% had a female householder with no husband present, 5.2% had a male householder with no wife present, and 43.1% were non-families. 35.9% of all households were made up of individuals, and 21.5% had someone living alone who was 65 years of age or older. The average household size was 2.17 and the average family size was 2.78.

It was in the Clearfield Community School District until 2014.

All content from Kiddle encyclopedia articles (including the article images and facts) can be freely used under Attribution-ShareAlike license, unless stated otherwise. Cite this article:
Clearfield, Iowa Facts for Kids. Kiddle Encyclopedia.