Clear Lake is a city in Cerro Gordo County, Iowa, United States. The population was 7,777 at the 2010 census. The city is named for the large lake on which it is located. It is the home of a number of marinas, state parks and tourism-related businesses. Clear Lake is also a major stop on Interstate 35 with many restaurants, hotels and truck stops.

The region around the lake that would later be called Clear Lake was a summer home to the Dakota and Winnebago American Indians. During a land survey of northern Iowa done in 1832 by Nathan Boone, the son of the famous explorer, Daniel Boone, a map was made showing the lake and other bodies of water in the area.

The Day the Music Died 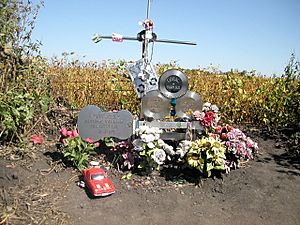 In the early hours of February 3, 1959, a Beechcraft Bonanza aircraft carrying Buddy Holly, Ritchie Valens, and The Big Bopper, who had been performing at the Surf Ballroom in Clear Lake, took off from the local runway in nearby Mason City, on its way to the next show in Moorhead, Minnesota.

The plane crashed soon after takeoff, killing all aboard. This event was later eulogized by folk singer Don McLean in his famous song, "American Pie", in which the death of these '50s icons serves as a metaphor for greater changes within American society as a whole.

In June 1988, around 600 people gathered to witness the dedication of the monument to the deceased rock and roll legends. Clear Lake also replaced street signs officially changing 2nd Place North to Buddy Holly Place in honor of the late singer. 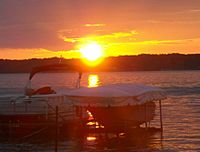 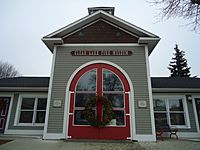 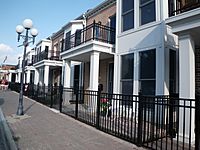 All content from Kiddle encyclopedia articles (including the article images and facts) can be freely used under Attribution-ShareAlike license, unless stated otherwise. Cite this article:
Clear Lake, Iowa Facts for Kids. Kiddle Encyclopedia.