Chillicothe () is a city in Wapello County, Iowa, United States. The population was 76 at the 2020 census.

The word "Chillicothe" is derived from the ancient Shawnee Indian words meaning "Principal Place." It was the name for one of their clans. The main chief of the Shawnee could only come from the Chillicothe clan. When a village was called Chillicothe, it meant that it was home to the principal chief. It was the capital city of the Shawnees until the death of that chief. Then, the capitol would move to the home village of the next main chief. That village would then become Chillicothe.

Chillicothe is the burial place of the oldest man to serve in the Civil War, Curtis King. 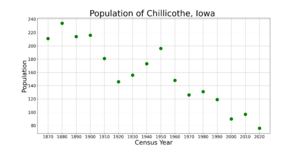 The population of Chillicothe, Iowa from US census data

There were 35 households, of which 37.1% had children under the age of 18 living with them, 48.6% were married couples living together, 5.7% had a female householder with no husband present, 5.7% had a male householder with no wife present, and 40.0% were non-families. 28.6% of all households were made up of individuals, and 8.6% had someone living alone who was 65 years of age or older. The average household size was 2.77 and the average family size was 3.33.

On the west side of town is a large coal-burning power plant that supplies power to a large part of southeastern Iowa.

The town also rates a bridge across the Des Moines River.

All content from Kiddle encyclopedia articles (including the article images and facts) can be freely used under Attribution-ShareAlike license, unless stated otherwise. Cite this article:
Chillicothe, Iowa Facts for Kids. Kiddle Encyclopedia.