Indianola is a city in Warren County, Iowa, United States, located 14 miles (23 km) south of downtown Des Moines, Iowa. The population was 15,833 at the time of the 2020 census. It is the county seat of Warren County. Indianola is home to the National Balloon Classic, a nine-day hot air balloon festival held annually in the summer, the Des Moines Metro Opera, a world renowned major American Summer Opera Festival, and Simpson College.

Indianola was founded in 1849 as the county seat of Warren County. The town was located near the geographic center of the new county. The town's name was taken from a newspaper account of a Texas town of the same name.

Indianola was incorporated in 1863.

In 2005, a special census was conducted that revised Indianola's population to 14,156. 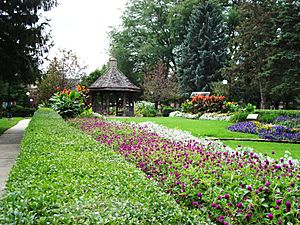 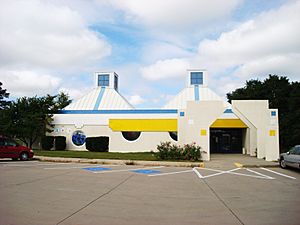 Indianola is served by the Indianola Community School District.

Simpson College, a liberal arts college of the United Methodist Church, is in Indianola, and was founded in 1860.

Iowa Highway 92 runs east and west through the city and crosses US Highways 65 and 69 southeast of the central business district.

Indianola no longer has railroad service. At one time, it served as a terminal point for a branch line of the Chicago, Burlington and Quincy Railroad which came off the CB&Q mainline at Indianola Junction which was 4 miles west of Chariton. There was a brick and stucco depot that stood across the tracks from the Rock Island depot. This line was abandoned in the early 1960s.

The other railroad was the Chicago, Rock Island and Pacific Railroad which branched off a branch line from Carlisle, Iowa which is just southeast of Des Moines to Summerset Junction a few miles north of Indianola and on into Winterset. The Winterset to Summerset Junction portion of the line was discontinued in the early 1960s leaving the Indianola to Carlisle line in place. There was a brick Rock Island depot just to the west of US Highway 65 & 69 in the center of Indianola. This line maintained sporadic service until the Rock Island went bankrupt in 1980. The line was then operated by the Chicago and Northwestern Railroad until the early 1990s at which point the line was abandoned back to Carlisle. The line was converted to the Summerset Trail from Indianola to Carlisle after abandonment.

The Rock Island and CB&Q lines both came in from the east and paralleled each other as they came into Indianola. They could interchange cars and there was at one point, first class Pullman passenger trains came down the Rock Island and then moved the CB&Q railroad to Chariton and on to St. Joseph Missouri. The Rock Island purchased a portion of the CB&Q after it was abandoned. Freight cars were sometimes stored there.

Scheduled passenger service and general aviation services are provided by Des Moines International Airport which is 13 miles NW of Indianola. There is two privately-owned airports near Indianola. Nash Field is 4 miles south of Indianola and is open to the public. Laverty Field is 3 miles north of Indianola and requires prior permission to land. 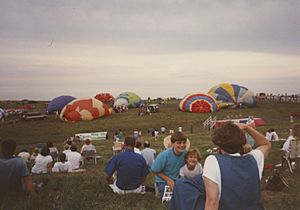 All content from Kiddle encyclopedia articles (including the article images and facts) can be freely used under Attribution-ShareAlike license, unless stated otherwise. Cite this article:
Indianola, Iowa Facts for Kids. Kiddle Encyclopedia.