Bloomfield is a city in Davis County, Iowa, United States. The population was 2,640 at the 2010 census. It is the county seat of Davis County.

Bloomfield is located in the southeastern part of Iowa near the Missouri border.
Bloomfield's longitude and latitude coordinates
in decimal form are 40.751122, -92.417007.

There were 1,122 households of which 29.9% had children under the age of 18 living with them, 46.9% were married couples living together, 9.4% had a female householder with no husband present, 4.5% had a male householder with no wife present, and 39.1% were non-families. 34.8% of all households were made up of individuals and 19.4% had someone living alone who was 65 years of age or older. The average household size was 2.27 and the average family size was 2.89.

The Davis County Fair is held in July every year at the fairgrounds, west of Bloomfield.

The week-long Davis County Country & Old Time Music Festival is held every September at the fairgrounds. 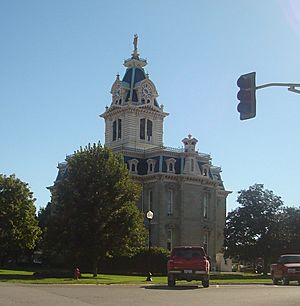 Davis County Courthouse in Bloomfield, listed on the National Register of Historic Places.

The Davis County Courthouse was designed by Thomas J. Tolan & Son, Architects, of Fort Wayne Indiana and is situated on the Bloomfield townsquare. In November 1876, the center of the square was cleared of trees and the following June, Larkworthy & Menke, of Quincy, Illinois, was awarded the contract to supply stone. The bell was made by the Meneely & Kimberly Bell Company of Troy, New York. The clock was made by the Seth Thomas Company and still resides within the clock tower. The building was completed in 1879. A chain surrounding the courthouse was added in 1879 and an iron fence, by the Cleveland Wrought Iron Fence Company, was added in 1881.

On August 27, 1924, Henry "Dare-Devil" Roland, "The Human Fly," attempted to climb the northwest corner of the courthouse. He fell to the ground from about 25 feet, breaking his hip. He was hospitalized in Bloomfield for six weeks, before returning east with his wife and daughter. On June 28, 1932, Roland made a return trip to Bloomfield to remove the blot from his record of successful climbs. This time, in just eleven minutes, he was sitting perched astride the statue of Blind Justice. Roland died October 7, 1937, as a result of a trapeze fall at Ottway, Tennessee.

The Davis County Court House was added to the National Register of Historic Places on May 3, 1974. The courthouse was photographed by Bob Thall as part of the Bicentennial project commissioned by Joseph E. Seagram & Sons, Inc. to document more than 1,100 American courthouses. One of the results of this project was the 1978 book Court House, edited by Richard Pare. Thall's photo was part of the project's traveling exhibition and also appeared in The New York Times Book Review, American Heritage and Newsweek magazines.

The Bloomfield Square Historic District, which surrounds the courthouse, was added to the National Register's listings on November 7, 1976.

The Davis County Courthouse Preservation Fund was incorporated in November 2005.

All content from Kiddle encyclopedia articles (including the article images and facts) can be freely used under Attribution-ShareAlike license, unless stated otherwise. Cite this article:
Bloomfield, Iowa Facts for Kids. Kiddle Encyclopedia.