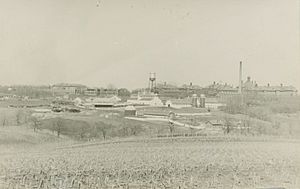 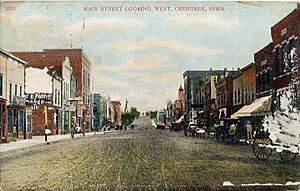 Cherokee was laid out as a town in 1870, and was named for the Indian tribe. Cherokee was incorporated on April 5, 1873. 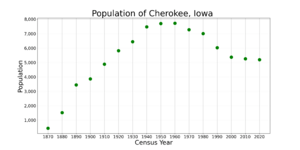 The population of Cherokee, Iowa from US census data

The nearby Cherokee Sewer Site is a well-preserved prehistoric Indian bison-processing site, which helped to redefine the Archaic period in the Midwest, and the Phipps Site is a National Historic Landmark 1000-year-old Plains farming village that may have been fortified.

The annual Jazz Festival is held in January, often headlined by Mark Pender a member of the Basic Cable band.

The Cherokee County Fair, and the Cherokee Rodeo are held in the summer.

Creek Fest is an annual summer music festival held along the banks of Mill Creek. Past performers include The Band Perry, Big & Rich, and Florida Georgia Line.

Cherokee is the home of the Sanford Museum and Planetarium that opened in 1951. The intent of the founders, Mr & Mrs W.A. Sanford, was to create a museum that was free and open to the public. The facility is currently (January 2011)[ref] still operated free to the public and has exhibits and activities on a variety of subjects including: archaeology, art, astronomy, geology, history, natural history, and paleontology.

Cherokee may be the smallest town in the world to have its own symphony orchestra, the Cherokee Symphony. This 60-member orchestra has been referred to as "the best kept secret in Northwest Iowa".

Cherokee is the home of Cherokee Regional Medical Center.

Cherokee is also the home of the Cherokee Mental Health Institute, under the Iowa Department of Human Services.

All content from Kiddle encyclopedia articles (including the article images and facts) can be freely used under Attribution-ShareAlike license, unless stated otherwise. Cite this article:
Cherokee, Iowa Facts for Kids. Kiddle Encyclopedia.