Beaman is a city in Grundy County, Iowa, United States. The population was 161 at the 2020 census. It is part of the Waterloo−Cedar Falls Metropolitan Statistical Area.

Beaman was originally called Wadiloupe. The present name is for H. H. Beaman, the original owner of the town site.

A post office was established as Wadiloup in 1867, renamed Beaman in 1875, and remains in operation. 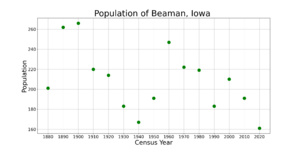 The population of Beaman, Iowa from US census data

There were 78 households, of which 35.9% had children under the age of 18 living with them, 44.9% were married couples living together, 7.7% had a female householder with no husband present, 11.5% had a male householder with no wife present, and 35.9% were non-families. 29.5% of all households were made up of individuals, and 9% had someone living alone who was 65 years of age or older. The average household size was 2.45 and the average family size was 2.98.

Designated as having a humid continental climate, this region typically has a large seasonal temperature differences, with warm to hot (and often humid) summers and cold (sometimes severely cold) winters. Precipitation is relatively well distributed year-round in many areas with this climate. The Köppen Climate Classification subtype for this climate is "Dfa". (Hot Summer Continental Climate).

The Beaman City Park is located in the city's downtown. The Beaman Gym serves as a recreational space; the city government had purchased it from the school district in the 1980s. The Beaman Memorial Hall serves as a meeting space for area organizations. The Beaman Arboretum in eastern Beaman serves as a nature area; it has 5 acres (2.0 ha) of space. The Tennis Court Park includes a facility that serves as a basketball and tennis court in warmer months and an ice skating rink in the winter.

The Beaman-Conrad-Lipscomb school district served Beaman until July 1, 1992, when it merged into BCLUW.

The city operates the Beaman Community Memorial Library. The library includes the Beaman Heritage Center, which serves as a community museum.

All content from Kiddle encyclopedia articles (including the article images and facts) can be freely used under Attribution-ShareAlike license, unless stated otherwise. Cite this article:
Beaman, Iowa Facts for Kids. Kiddle Encyclopedia.