Cresco was platted in 1866 at the time the railroad was expanding into the area. Cresco is a Latin phrase meaning "I grow". Cresco was incorporated on June 6, 1868,

According to the United States Census Bureau, the city has a total area of 3.35 square miles (8.68 km2), all of it land. 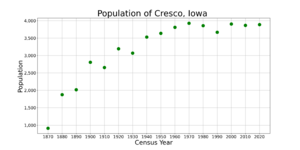 The population of Cresco from US census data

There were 1,660 households, of which 29.3% had children under the age of 18 living with them, 45.1% were married couples living together, 9.0% had a female householder with no husband present, 3.9% had a male householder with no wife present, and 42.0% were non-families. 36.3% of all households were made up of individuals, and 17.3% had someone living alone who was 65 years of age or older. The average household size was 2.26 and the average family size was 2.95.

The Mighty Howard County Fair is held annually in Cresco every June. 2014 was the 121st year that the fair was held.

Cresco Community Theatre is a non-profit organization open to anyone with an idea or the desire to contribute. The decision of which shows to be produced on the Cresco stage are reached by the contributing members, and range from famously named productions to the locally written plays.

Cresco is home to the Glen Brand Wrestling Hall of Fame of Iowa that had its first inductee banquet in 1970. As of April 2010[ref] there are 97 members who have made outstanding contributions to the sport of amateur wrestling.

Although Cresco is no longer on a railroad line, it is home to a restored Milwaukee Road FP7 diesel engine which is known as the Heritage Train and displayed in Beadle Park at the center of the city on Highway 9. Cresco is also headquarters for Featherlite Trailers.

The Cresco post office contains a mural, Iowa Farming, painted in 1937 by Richard Haines. Murals were produced from 1934 to 1943 in the United States through the Section of Painting and Sculpture, later called the Section of Fine Arts, of the Treasury Department. The mural recalls his earliest days in Marion, Iowa depicting a farm scene with horses, cows, pigs, chickens, and family members performing chores as a mother reads a letter just delivered by the postal service.

Cresco is home to one of the largest school districts in Iowa in terms of square miles, the Howard–Winneshiek Community School District. The district was formed from the merger of the Cresco, Lime Springs/Chester, Elma, and Ridgeway school districts, opening on July 1, 1960. As of 2019[update] Crestwood Secondary School is the secondary school.

All content from Kiddle encyclopedia articles (including the article images and facts) can be freely used under Attribution-ShareAlike license, unless stated otherwise. Cite this article:
Cresco, Iowa Facts for Kids. Kiddle Encyclopedia.