Colfax is a city in Jasper County, Iowa, United States. Colfax is located approximately 24 miles east of Des Moines. The town was founded in 1866, and was named after Schuyler Colfax, vice president under Ulysses S. Grant. The population was 2,255 at the time of the 2020 census. Newton is the county seat; both were named after Revolutionary War soldiers.

Colfax was laid out in 1866. It is named for Schuyler Colfax.

In its heyday, the city of Colfax had two main industries that drew thousands to the area: the mining of coal, and the use of the mineral springs discovered near the city.

The first large scale coal mine in Jasper County was the Watson No. 1 Mine, 5 miles southeast of town, connected to the Rock Island by a long railroad spur. From 1881 to 1900, the Jasper County Coal and Railway Company operated a number of mines north of Colfax. The Colfax Consolidated Coal Company formed in 1902, bringing the mines of Colfax under a common operator. They opened mine No. 8 in 1905; this was one of the best equipped mines in the state. The coal camp of Severs was run by this company.

In the process of drilling for coal in 1875, a well containing high mineral content was discovered near Colfax. The city flourished with this new discovery, and over the next four decades, thousands of people visited the town to partake in the healing powers of the fourteen mineral springs there. Nine hotels offering mineral baths and spa treatments opened to house guests, and four bottling companies opened to produce bottled mineral water for the masses. In 1912–1913, the city received funding to build a Carnegie library. The library is still in use today. The booming business of the city's mineral springs industry declined and died out as the Great Depression swept the country. 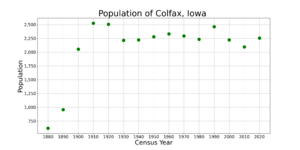 The population of Colfax, Iowa from US census data 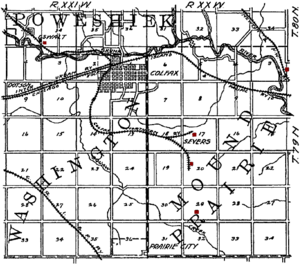 Map of Colfax from 1908, showing the railroads and coal mines (shown in red) of the region. 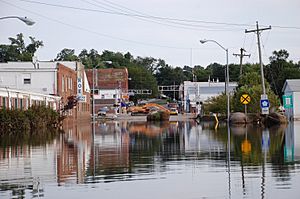 Part of downtown Colfax was flooded in 2010.

There were 851 households, of which 32.8% had children under the age of 18 living with them, 49.4% were married couples living together, 12.3% had a female householder with no husband present, 5.2% had a male householder with no wife present, and 33.1% were non-families. 27.7% of all households were made up of individuals, and 13.5% had someone living alone who was 65 years of age or older. The average household size was 2.42 and the average family size was 2.95.

All content from Kiddle encyclopedia articles (including the article images and facts) can be freely used under Attribution-ShareAlike license, unless stated otherwise. Cite this article:
Colfax, Iowa Facts for Kids. Kiddle Encyclopedia.