Dunkerton is a city in Black Hawk County, Iowa, United States. The population was 842 at the time of the 2020 census. It is part of the Waterloo–Cedar Falls Metropolitan Statistical Area.

In 1853, two brothers, James and John Dunkerton, walked from Dubuque, Iowa, to stake out a claim of land near Lester. This claim became the town known as Lesterton, and later Dunkerton. In 1854, John died and was buried in the small cemetery which now holds 4 generations of Dunkertons. James remained and built up his land. On December 25, 1854, he married Christiana Hodges. At 60 years of age, James and his eldest son, sold a portion of their land to the railroad, requesting that the railroad be extended to Iowa. This act enabled the present City of Dunkerton to be established.

The Dunkerton Bridge is a piece of history, spanning over Crane Creek from the city to the Charma Park. The pedestrian bridge, built in 1909, is still usable today.

In honor of Dunkerton's Veterans, the city has put up a brand new memorial. It is located on Canfield Rd. and Main St. and is the beginning to the city project of turning the flood zone into beautiful park areas.

Dunkerton celebrates "Dunkerton Days" in late July, with a car show, a parade, mud volleyball tournament, fishing derby and bike races among other local activities. The highlight of Dunkerton Days is the fireworks show which brings many people from surrounding areas.

After many years of city planning and fundraising, the Dunkerton Public Library was rebuilt out of the flood zone and opened its doors in December, 2010. The new facility includes computers, expanded inventory, and a special children's section. 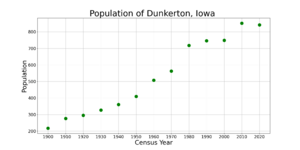 The population of Dunkerton, Iowa from US census data

There were 327 households, of which 38.2% had children under the age of 18 living with them, 59.6% were married couples living together, 9.5% had a female householder with no husband present, 3.4% had a male householder with no wife present, and 27.5% were non-families. 24.5% of all households were made up of individuals, and 9.5% had someone living alone who was 65 years of age or older. The average household size was 2.61 and the average family size was 3.13.

All content from Kiddle encyclopedia articles (including the article images and facts) can be freely used under Attribution-ShareAlike license, unless stated otherwise. Cite this article:
Dunkerton, Iowa Facts for Kids. Kiddle Encyclopedia.