Crescent is a city in Pottawattamie County, Iowa, United States. The population was 628 at the 2020 census.

The city lies directly across the Mormon Bridge from North Omaha, and is located at the base of the Loess Hills. The Mount Crescent skiing area lies near the town, and is the nearest ski and snowboarding slope to the Omaha-Council Bluffs metropolitan area. In the summer the area serves as a recreational facility for activities such as paintball and cross-country running. Neighboring Hitchcock Park supports various types of wildlife and many miles of hiking trails.

Crescent was originally laid out by Joseph E. Johnson, a Latter-day Saint who also published a paper there in the 1850s. Before the near universal exodus of the Mormons to Utah in 1852 (many left beginning in 1847, but they were the majority of the population until 1852) the area was known as Brownell's Grove and Farmersville. 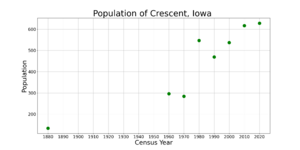 The population of Crescent, Iowa from US census data

There were 235 households, of which 28.5% had children under the age of 18 living with them, 68.1% were married couples living together, 4.7% had a female householder with no husband present, 2.6% had a male householder with no wife present, and 24.7% were non-families. 17.0% of all households were made up of individuals, and 6.8% had someone living alone who was 65 years of age or older. The average household size was 2.63 and the average family size was 2.99.

All content from Kiddle encyclopedia articles (including the article images and facts) can be freely used under Attribution-ShareAlike license, unless stated otherwise. Cite this article:
Crescent, Iowa Facts for Kids. Kiddle Encyclopedia.