Kellogg is a city in Jasper County, Iowa, United States. The population was 606 at the time of the 2020 census. It was originally named Manning's Station, then carried the names Jasper City, Kimball, and then finally Kellogg, named for the pioneer settler Judge Abel Avery Kellogg.

Kellogg was laid out in 1865 in anticipation of the Mississippi and Missouri Railroad being built through that territory. The railroad reached the town in 1866 and it was designated a station on the line. The terminus of the railroad remained in Kellogg for some time, fueling the early growth of the town.

Today, one of Kellogg's most notable features is the five-building Kellogg Museum complex. Its main building is the former Simpson Hotel, constructed in 1909. The museum complex also boasts an original one-room schoolhouse and a country church.

According to the United States Census Bureau, the city has a total area of 0.37 square miles (0.96 km2), all of it land.

All addresses within Kellogg fall under the 50135 ZIP code. Most individuals receive mail at a post office box rather than at their residence.

Kellogg's streets are labeled only by name, for example, "Adair St." House numbers originate at the southeast corner of the town and increase as one moves west or north. Kellogg's business district, including the Kellogg Museum complex, is located on High St. 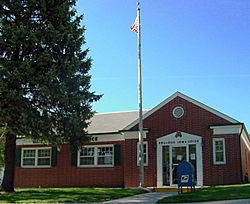 There were 261 households, of which 26.4% had children under the age of 18 living with them, 51.3% were married couples living together, 8.4% had a female householder with no husband present, 1.5% had a male householder with no wife present, and 38.7% were non-families. 32.2% of all households were made up of individuals, and 10.3% had someone living alone who was 65 years of age or older. The average household size was 2.30 and the average family size was 2.91.

All content from Kiddle encyclopedia articles (including the article images and facts) can be freely used under Attribution-ShareAlike license, unless stated otherwise. Cite this article:
Kellogg, Iowa Facts for Kids. Kiddle Encyclopedia.