Epworth was platted in 1855. It was named from the town of Epworth, Lincolnshire, England, the birthplace of John Wesley. Epworth was incorporated as a city on November 20, 1879,

According to the United States Census Bureau, the city has a total area of 1.56 square miles (4.04 km2), all land.

Epworth is located along U.S. Route 20, and is about 12 miles west of Dubuque. 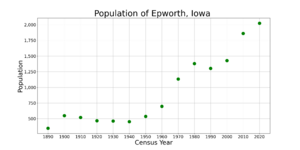 The population of Epworth, Iowa from US census data

There were 643 households, of which 39.2% had children under the age of 18 living with them, 62.8% were married couples living together, 8.6% had a female householder with no husband present, 4.5% had a male householder with no wife present, and 24.1% were non-families. 19.4% of all households were made up of individuals, and 6.6% had someone living alone who was 65 years of age or older. The average household size was 2.71 and the average family size was 3.13.

Epworth is the now the fifth-largest city in Dubuque County with spacious, new subdivisions housing many new residents, a significant portion of whom work in Dubuque, Iowa or elsewhere outside the community. The 11.3% increase in population from 2000 to 2006 places Epworth above the 90th percentile in population growth among municipalities nationwide.

Epworth is home to Divine Word College, which is a Roman Catholic seminary.

All content from Kiddle encyclopedia articles (including the article images and facts) can be freely used under Attribution-ShareAlike license, unless stated otherwise. Cite this article:
Epworth, Iowa Facts for Kids. Kiddle Encyclopedia.