Kids Encyclopedia Facts
This page is about the English parish and town. For other uses, see Epworth (disambiguation).

Epworth is a small town and civil parish in the Isle of Axholme, North Lincolnshire, England. The town lies on the A161, about halfway between Goole and Gainsborough. As the birthplace of John Wesley and Charles Wesley, it has given its name to many institutions associated with Methodism. Their father, Samuel Wesley, was the rector from 1695 to 1735.

Epworth is situated in the Isle of Axholme. The Isle is so called because, until it was drained by the Dutch engineer Sir Cornelius Vermuyden in 1627–1629, it was an inland island surrounded by rivers, streams, bogs and meres.

The Domesday Book in 1086 recorded:

"Manor In Epeuerde, Ledwin had eight carucates of land to be taxed. Land to twelve ploughs. Geoffrey de Wirce has there two ploughs, and eight sokemen, with two carucates and five oxgangs of this land; and thirteen villanes and nine bordars with six ploughs, and eleven fisheries of five shillings, and sixteen acres of meadow. Wood pasture one mile long and one mile broad.. Value in King Edword's time £8 now £5. Tallaged at twenty shillings.

A grant of the common land to the freeholders and other tenants, made by deed in 1360 by John de Mowbray, Lord of the Manor, gave privileges and freedoms over the use of common land, reed gathering, rights over fish and fowl and such wildlife as could be taken by the commoners for food. The deed caused repercussions in the reign of King Charles I (1625-1649) when Vermuyden was granted the task of draining the Isle and he and his Dutch partners came under regular attack in their stockade at Sandtoft. The draining of the land saw the ancient rights of the commoners encroached upon: as the land dried up they lost their supply of wildfowl for food, foraging rights and employment as mere men, swanniers, and ferry operators in addition to their grazing rights. A whole way of life that had seen annual otter hunts on the Trent, not to mention abundant salmon, was lost along with many livelihoods. The resentment felt by the Isle of Axholme towards the king doubtless explains their siding with Parliament in the English Civil War (1642-1651). Nevertheless, Vermuyden's work, an outstanding piece of irrigation engineering, turned thousands of acres of marsh and bog, which had been impassable except in high summer or hard frost, into the rich arable farmland that the Isle benefits from today.

Extensive drainage continued, which, together with periodic warping (intentional flooding to deposit silt and enrich the land), has made this an exceptionally fertile area.

The Isle of Axholme was originally the eight parishes of Althorpe, Belton, Crowle, Epworth, Haxey, Luddington, Owston and Wroot.

The Axholme Joint Railway served Epworth; it ceased service to the town in 1956. 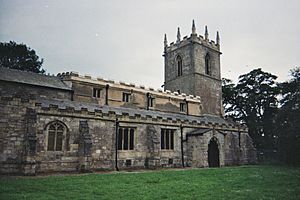 The Old Rectory, a Queen Anne style building, rebuilt after the fire of 1709, has been completely restored and is now the property of the World Methodist Council. It is maintained as a museum. It is also the site of supposed paranormal events that occurred there in 1716, while the Wesley family was living in the house.

The Church of England parish church of Saint Andrew is on a hill overlooking the town. Its architecture suggests that its oldest part may have been built in the late 12th century with later additions in the 14th and 15th centuries. The Rev. Samuel Wesley, father of John and Charles Wesley, was Rector here (and is buried in the churchyard). 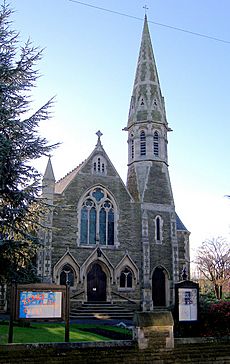 Epworth is described as the 'Home of Methodism' and there is a Methodist church in the centre of the town. This was built in 1888 (opened for worship in 1889) and continues to be a busy hub in the centre of the community. The church (along with the town as a whole) attracts hundreds of visitors from around the world each year tracing the history of the Methodist movement. There is a trail around the town linking the sites which were significant for the Wesley family.

An example of the Dutch influence on local architecture can be seen in the building now used as the Post Office, situated in the High Street.

The Epworth Show has been held for over 60 years, and takes place on the August Bank Holiday Monday.

The show was first held before the Second World War on Battle Green, later moving to Scawcett Lane. Today it is held at Wroot Road – the site has been enlarged and extra facilities added – where a number of other community events are held.

Originally the show catered only for the local area. Over the years it has grown, and whilst still having an agricultural aspect – with cattle, sheep, goats, shire horses and vintage tractors – it provides entertainment and activities including show jumping, mountain & moorland ponies, trade stands, vintage vehicles, a beer tent, children's entertainment and a dog show.

Epworth Show has links with the three Epworth churches which come together for a prior Sunday evening service, and on show day share an information tent.

The Show is run by the Epworth and District Agricultural Society, a charitable organisation. Its committee comprises community and honorary members, and patrons. Other activities run by the society between May and September include four horse & pony events, and an August Bank Holiday weekend Beer Festival with live bands.

Festival of the Plough

Epworth has hosted the Epworth Festival of the Plough agricultural fair for a number of years.

All content from Kiddle encyclopedia articles (including the article images and facts) can be freely used under Attribution-ShareAlike license, unless stated otherwise. Cite this article:
Epworth, Lincolnshire Facts for Kids. Kiddle Encyclopedia.